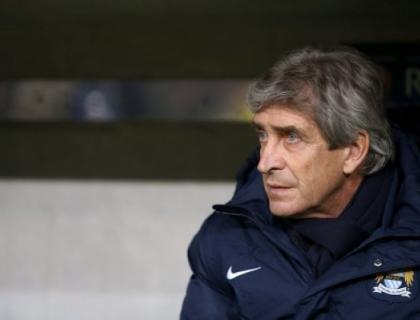 Joy of six for City

Manchester City put themselves firmly in the title picture with a convincing 6-3 win over leaders Arsenal at the Etihad Stadium.


The prolific strikeforce of Sergio Aguero and Alvaro Negredo were again on target while Fernandinho struck twice and David Silva and Yaya Toure also got on the scoresheet.


Theo Walcott marked his first start since September with two fine goals to keep Arsenal in contention but Per Mertesacker's late header was mere consolation for a side ultimately well beaten.


City, who have now scored 35 goals in their eight home games this season, fully deserved the three points to move within three of the Gunners.


The only major downside for Manuel Pellegrini's men was the loss of Aguero early in the second half with what appeared a calf injury.


Yet for now the statement from City in title terms, particularly at home as they maintain their 100 per cent record, is resounding.


As has become the norm at Eastlands, they began at a lively pace.


Not in the least bit intimidated by Arsenal's superb form this season, they attacked at their fluid best.


Twice good balls were delivered into the Arsenal box early on but first former Gunners star Samir Nasri could not turn and then Aguero saw the ball nicked away.


Remarkably, despite seeing little of the ball, Arsenal actually had the first clear-cut chance but Jack Wilshere screwed a shot horribly wide.


City deservedly opened the scoring after 14 minutes when Martin Demichelis flicked on a corner and Aguero once again showed perfect balance to hook in a volley at the back post.


It was the Argentinian's 18th goal in his last 16 games and 19th overall in a so far prolific season. City will hope the injury that later ended his involvement is not serious.


City should have doubled their lead as Vincent Kompany showed great footwork to skip around an Aaron Ramsey challenge and feed Negredo, but the Spaniard missed the target.


The visitors did pull level on 32 minutes after Ramsey robbed Toure and sent Ozil clear. The German pulled the ball back and Walcott coolly slotted in from the edge of the area.


City's lead should have been instantly restored by Negredo but he curled wide from a fine Silva through ball.


Negredo did get it right on 39 minutes as he tucked home a Pablo Zabaleta cross from close range after the right-back had been picked out by a Toure crossfield pass.


Problems appeared to worsen for Arsenal as Laurent Koscielny suffered a deep cut to the knee in attempting to tackle Negredo and was forced off.


Demichelis then glanced a header over from a Nasri corner as City ended the first half strongly.


They continued in much the same fashion after the break but suffered a blow when Aguero slumped to the turf with what appeared a calf injury.


He was replaced by Jesus Navas but there appeared no discernible difference to City's performance as they added a third after 50 minutes.


Ozil lost possession and Fernandinho took full advantage curling in from the edge of the area for his first goal since his B#30million summer move from Shakhtar Donetsk.


Arsenal were far from beaten but Olivier Giroud fluffed a shot from in front of goal and then headed wide from a Bacary Sagna cross.


The visitors appealed for a penalty for handball against Zabaleta but contact, after the ball had ricocheted off his thigh, was deemed accidental.


Walcott did pull Arsenal back into the game with a sublime goal just after the hour.


Ramsey found him in space and, spotting Pantilimon off his line, brilliantly lobbed into the far top corner.


City hit back in the way they know best as Navas weaved his way through the defence on the right and pulled the ball back for Silva to sidefoot home from eight yards.


Navas rounded Wojciech Szczesny as City went in search of more but could only find the side-netting before Toure flashed a long-range effort wide.


Fernandinho also stung the palms of Szczesny and Nasri was denied a shooting chance by a good tackle.


Nasri put another opportunity over before laying off for Fernandinho to cleverly dink in a fifth goal in the closing moments.


Nicklas Bendtner thought he had headed in a late consolation only to be flagged offside but Pantilimon, who earlier saved well from Wilshere, was beaten in injury time by a Per Mertesacker header.


Toure had the final word from the penalty spot after substitute James Milner was tripped by Szczesny.