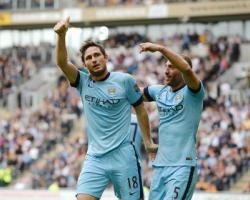 Man City 4-1 Tottenham Hotspur: Match Report - view commentary, squad, and statistics of the game as it happened.Classical Aguero inspires CitySergio Aguero delivered the performance Mauricio Pochettino feared as he fired all four goals in Manchester City's dramatic 4-1 win over 10-man Tottenham.Spurs boss Pochettino had compared Aguero's play to the genius of Mozart in the build-up to the Barclays Premier League clash at the Etihad Stadium and his side simply proved incapable of stopping him.But the goals told only part of the story of a breathless encounter which featured four penalties - two of which were saved - countless chances and a red card for Tottenham's Federico Fazio.Aguero missed one of the penalties himself, being denied by Hugo Lloris after he had already struck twice, either side of a Christian Eriksen equaliser.Spurs' luckless striker Roberto Soldado was also out of luck from the spot, as Joe Hart capped another superb display with a brilliant save.There was debate about most of the penalty decisions by referee Jon Moss, not least the one which saw Fazio dismissed on his league debut for a foul on Aguero.But Aguero did convert two of his three penalties and he wrapped up the scoring with a finish as sublime as the one with which he opened it

James Milner also hit the post late on as the game proved compelling from the first minute to the last.Spurs were thrashed 6-0 and were a goal down within a minute on the same ground 11 months ago

They performed much better this time but the end result was that the champions still had too much for them.They started well with Ryan Mason dragging a shot wide and then being denied when clean through by Hart

The England goalkeeper was in action again moments later as he tipped over an Eriksen drive.City looked much better in attack than defence and David Silva almost put Aguero through before Jesus Navas tested Lloris.Frank Lampard, starting ahead of the presumably rested Yaya Toure, then robbed Erik Lamela to set up the first goal, although Aguero still had plenty to do.The Argentinian actually seemed to have few options on the left of the area but he opened his body and clipped a superb shot inside the far post.Spurs produced an immediate response as Mason robbed Fernando and Soldado released Eriksen to smash a powerful shot in, off Hart and then off the underside of the crossbar.But the visitors could not retain parity for long as Lampard exchanged passes with Milner and then went down under a challenge from Lamela in the area.Moss had little hesitation in awarding the penalty and Aguero stepped up to fire home his second.City looked impressive in possession but their rhythm might have been disrupted when the influential Lampard appeared to suffer a thigh injury and had to be carried off just before the half-hour.Yet the hosts pressed on and Aguero might have had his hat-trick - when he shot straight at Lloris - even before being presented with a second spot-kick as Younes Kaboul felled Silva.Lloris saved well from Aguero and the striker put the rebound over with a scissors kick.Spurs looked to make the most of the reprieve but Hart produced another fine save to keep out a Mason drive and also palmed away a long-range Eriksen effort.A frantic first half ended with Lloris saving from Navas and the second began with the same man stopping an Aguero shot

Navas was also frustrated in front of goal before Aguero failed to connect with a Silva cross by inches.There was another dramatic twist just after the hour as Martin Demichelis was adjudged to have brought down Soldado.But the third penalty awarded became the second one saved as Hart plucked Soldado's shot out of the bottom corner with a full-stretch dive.The England keeper had to be alert again moments later as Soldado connected firmly with a cross and he saved with his feet.City weathered that storm but it took another moment of controversy for them to gain firm control.This time Spurs league debutant Fazio was deemed to be in the wrong, pulling back his countryman Aguero off the ball and in front of goal to earn a red card.This time Aguero made no mistake from the spot and he was still far from done, scoring a fourth as he chased down a long ball from Fernandinho and curled in another fine shot.Spurs were already beaten as Toure came on for the final 14 minutes as Milner almost added to their woes with a curling shot that struck the post