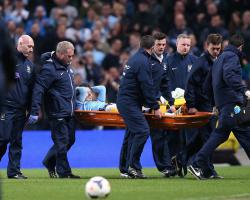 Silva injury mars City winDavid Silva was stretchered off as Manchester City's 3-1 crucial Barclays Premier League win over struggling West Brom threatened to come at a price.Silva fell to the ground after a tangle involving Morgan Amalfitano and Billy Jones in the 67th minute, and after treatment was taken straight down the tunnel with his right leg in a brace.Two goals in the first 10 minutes had paved the way for City to keep the pressure on leaders Liverpool and avoid any repeat of their shock home draw with rock-bottom Sunderland last Wednesday.Pablo Zabaleta got the home side off to a flying start and Sergio Aguero quickly added a second

Despite a superb strike from Graham Dorrans which briefly reduced the deficit, a close-range effort from Martin Demichelis effectively wrapped up a win which leaves City six points behind the leaders with a game in hand.The Baggies, who stay hovering just three points above the drop zone after this latest setback, showed plenty of promise on the break but were let down by some dismal defending and were ultimately fortunate not to find themselves on the end of a heavier defeat.There was a degree of fortune about City's third minute opener as Baggies keeper Ben Foster saved superbly from Aguero but could only flap the ball straight at Zabaleta, who headed back into the net.Aguero blazed over the bar before Albion offered a reminder of their sporadic counter-attacking threat when a swift move ended in Matej Vydra bundling the ball into the net only to be ruled offside.Edin Dzeko was denied by a crucial Jonas Olsson block in the box before Aguero found space 20 yards out to drill a low effort across Foster and into the corner of the net to double City's advantage.City looked set to take full advantage of an opportunity to boost their goal difference, but the visitors proved adept at exploiting the open spaces afforded them and after Stephane Sessegnon shot just over the bar, Dorrans got his side on the board with a superb strike.The Baggies midfielder was played in by Vydra down the right flank and after two expert flicks on the edge of the box, he drilled a fine effort home to Joe Hart's left.Suddenly some nerves became evident in the City back-line with Hart spilling a Chris Brunt free-kick before referee Phil Dowd flagged for offside, but City's third goal on 36 minutes brought an end to the Albion revival.Samir Nasri sent in a corner from the City left and the ball evaded everyone in the box before falling at the feet of Demichelis, who could hardly believe his luck as he bundled home from six yards.Albion continued to have their chances with Amalfitano setting up Sessegnon, whose close-range effort looked goal-bound until it struck the leg of Kompany and deflected on to the roof of the net.In a much more low-key second half Foster got in bravely at the feet of Dzeko to deny City a fourth, before the departure of Silva - moments after an uncomfortable-looking Aguero had been replaced by Stevan Jovetic - caused consternation in the City ranks.Albion continued to chase what looked an increasingly lost cause, Amalfitano bringing a fine save out of Hart while substitute Victor Anichebe briefly caused havoc in the City box before Foster cleared.Another Baggies substitute Saido Berahino had a penalty shout rejected by Dowd before Dzeko curled his late effort inches wide after a neat lay-off from Jovetic.City substitute James Milner had the last chance of the match when he drilled a low injury-time effort which was well saved by the impressive Foster in the visitors' goal