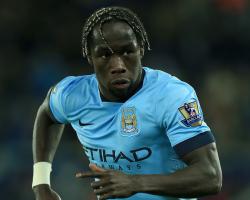 Man City 3-0 Crystal Palace: Match Report - view commentary, squad, and statistics of the game as it happened.Silva strikes sink PalaceDavid Silva struck twice as Manchester City made light of their absence of strikers to brush troubled Crystal Palace aside 3-0 at the Etihad Stadium.Yaya Toure also got on the scoresheet as the champions moved level on points with Chelsea at the top of the Barclays Premier League.It was in-form City's eighth successive win in all competitions - one short of equalling a club record.Palace offered little in what was a routine victory for City, who will be pleased to have won so comfortably without injured strikers Sergio Aguero, Edin Dzeko and Stevan Jovetic, and captain Vincent Kompany.Without a recognised forward, City packed their side with six midfielders.James Milner operated in the most advanced role but Silva and Samir Nasri also got forward in support.The system worked well against a Palace side who have now won just once in 11 games, but their lack of cutting edge was evident in a scoreless first half in which they got none of their eight attempts on target.Nasri had the first of them when he stabbed an effort narrowly wide in the second minute after good work from Jesus Navas and Pablo Zabaleta.Palace were limited but did possess some threat in the shape of the skilful Yannick Bolasie, who was by some distance the visitors' most dangerous player.Bolasie jinked past Martin Demichelis on the right but Joe Hart, fresh from signing a new contract, parried his cross to safety.City survived a scare when Bolasie headed back into the area from a half-cleared free-kick and Fraizer Campbell, onside and unmarked, put an overhead kick across goal and wide.City played a patient game as they looked to pick their way through the Palace defence and the chances eventually came - although most went begging.Toure twice shot over from outside the box and Silva had a close-range effort deflected wide after Nasri wriggled through the defence.Silva then miskicked in front of goal before Zabaleta spurned a great chance when he broke through and clipped the ball over Julian Speroni and wide.Bolasie fired into the side-netting but little else came from Palace as City noticeably stepped up a gear in the second half.They were ahead within four minutes of the restart as Zabaleta again burst into the box but this time pulled back for the inrushing Silva.The Spaniard made a firm connection but he still benefited from a large slice of luck as his shot took a deflection off Scott Dann and looped over Speroni.City looked hungry for more after that and Toure blasted over again as they kept up the pressure.It paid off with a second Silva goal on the hour, the playmaker this time diverting the ball in from six yards from a good low cross by Aleksandar Kolarov

It proved Silva's last significant action as he made way for Frank Lampard soon after.Palace got the ball in the net when James McArthur headed firmly past Hart from a Bolasie cross but the flag was raised for offside.It was a tight decision and City sought to ensure Palace did not get so close again.They began to close the game down in a professional manner and made it 3-0 with a swift break nine minutes from time.Navas released Milner with a fine through ball and the England man did well to hold up play and wait for Toure to take over

Toure collected possession on the edge of the box and powered forward to smash in a shot off Speroni's near post.Palace almost forced Demichelis to concede a late own goal but City held onto a clean sheet