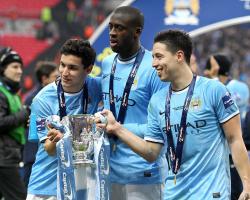 City held by plucky Black CatsManchester City saw their title hopes effectively ended after being held to a home draw by the Barclays Premier League's bottom club Sunderland.If Sunday's defeat at the hands of Liverpool had deeply wounded City's chances then this frenetic 2-2 draw could prove the killer blow.As for Gus Poyet's Sunderland, who came into this match on the back of a run that had seen the Black Cats lose five on the bounce, their survival hopes remain alive, if only just.Manuel Pellegrini's men, sorely missing the injured David Silva and Yaya Toure, are now six points behind leaders Liverpool with a game in hand.City had taken an early lead through Fernandinho, and had appeared to have held off Sunderland's challenge until two fine goals by Connor Wickham in the second half threatened a real upset.Samir Nasri grabbed a point with a late equaliser but then missed a glorious chance for a winner as City's hopes of making up lost ground faded.After playing their part to the full in Sunday's thriller at Anfield, City looked content to settle for a dour, low-scoring win: the Liverpool match no doubt underlining that verve and elan may win you admirers, but not the title.When, however, Fernandinho fired them into the lead after just one minute and 54 seconds it seemed that had banished the pain of Sunday, yet City never really built on that early platform.It was a well-worked goal too, though it owed much to Lee Cattermole's brain not having got into gear

The Sunderland midfielder was robbed by Alvaro Negredo who fed Sergio Aguero, and when the return pass came the Spanish striker stepped over the ball leaving Fernandinho free to plant his shot past Vito Mannone at the near post.The groans from the travelling Sunderland fans were almost audible, and their frustration grew as the visitors responded by forcing chance after chance only to see them go begging.John O'Shea was the leading culprit, putting two clear headers wide, while Fabio Borini dragged his shot wide of the far post when put through to face Joe Hart one-on-one.Fernandinho attempted to redress the balance for City but skied an equally-good opening after Mannone had only managed to parry Aguero's fierce strike.Aleksandar Kolarov struck wide after a stirring run down the left as the first half ended with City looking to have fended off Sunderland's best thrust, and Poyet wondering what might have been.City's malaise continued in the second half as Sunderland's performance continued to impress.Negredo and Aguero had half chances before Pellegrini sent on Stevan Jovetic in place of the Argentinian.Jovetic looked impressive but could not add to City's single goal and instead it was Sunderland who made the breakthrough.Poyet looked furious when Jack Colback failed to capitalise on a one-on-one chance by Hart, but that turned to delight when Emanuele Giaccherini burst down the felt and floated a beautiful cross for Wickham to thump home with glee.Edin Dzeko held his head after missing the target, then came a dream moment for Sunderland fans as Giaccherini broke from his home half, delivered an excellent pass to Wickham who did not break stride as he buried his shot past Hart.Humiliation was looming for City but in frenetic finish Nasri forced an equaliser - the ball trickling agonisingly over the line after Mannone had got his fingers to it.The Frenchman could have won it at the death too - but his shot went up in smoke and so too did City's title hopes