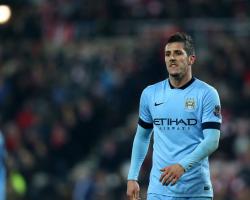 Man City 2-2 Burnley: Match Report - view commentary, squad, and statistics of the game as it happened.Clarets clinch City pointAshley Barnes struck a stunning equaliser as Burnley staged a remarkable comeback to snatch a 2-2 draw against stunned champions Manchester City.City had looked set to cut Chelsea's lead at the top of the Barclays Premier League to one point as David Silva and Fernandinho scored in a commanding first-half display at the Etihad Stadium.But the battling Clarets responded after the break, controversially pulling one back through George Boyd before Barnes lashed home a brilliant leveller nine minutes from time.Burnley's fightback denied City a club record 10th successive win and was a real bonus in their fight against relegation.City could complain that Boyd looked offside when scoring in the 47th minute but the visitors' greater energy and determination after the break arguably deserved tangible reward.City will view it as points dropped given that Chelsea also drew - but they had apparently rested key midfielder Yaya Toure and again started without a recognised striker.Stevan Jovetic was on the bench after recovering from injury but James Milner again operated as a makeshift centre-forward with Silva playing behind.There seemed little to alarm them at first

City's first chance came after five minutes as Boyd diverted a Samir Nasri corner into the path of Martin Demichelis but the defender's shot was blocked by Jason Shackell.The pacy Jesus Navas stretched Burnley down the right and Milner did well to nip between two defenders to meet his ball across goal but he shot over from six yards.Burnley had a good spell themselves early on but they failed to take advantage of some good openings.Kieran Trippier flicked in a good cross but Barnes was unable to make contact and Dean Marney's snap-shot from the edge of the area was straight at Joe Hart.Danny Ings also fired over before City took control with Silva's well-worked 23rd-minute opener.The hosts built patiently until finding a way through as Nasri fed Navas down the right

Navas turned the ball back inside to find Silva and he had the space to turn in a drill home a low shot for his fourth goal in three appearances.City doubled the lead 10 minutes later after more patient approach play.Nasri looked to have been crowded out on the edge of the area but Fernandinho had more space behind him and took a touch before lashing home a powerful curling shot off the underside of the bar.City looked in control and went close to a third before the break as Navas tested Tom Heaton with a powerful shot following another quick break.City's mood might have been further lifted at half-time with news that Chelsea had been held to a draw by Southampton, but they were shocked within two minutes of the restart.Ings got the better of Pablo Zabaleta on the left and shot across goal

Hart looked to have it covered but Boyd nipped in and, despite suspicions of offside, appeared to get a final touch to divert the ball into the net.City almost immediately restored a two-goal advantage as Shackell cleared from Demichelis and Nasri forced Heaton to tip round the post.But Burnley began to look a much tougher proposition as Ings flashed a shot narrowly wide and Shackell headed over from a Trippier free-kick.City boss Manuel Pellegrini decided it was time to introduce a striker and Jovetic came off the bench to provide the team with a new focal point

But still Burnley dug in and frustrated City as they tried to launch further attacks.Frank Lampard also came on in an attempt to steady City's nerves but Burnley put themselves in sight of an unlikely point after Zabaleta was booked for fouling Shackell.Trippier lofted the resulting free-kick into the area and Barnes flicked on

It rebounded off Michael Keane back into Barnes' path and he struck a ferocious shot from inside the area that flew into the top corner.City were unable to muster a decent response and Burnley held on to celebrate an impressive result