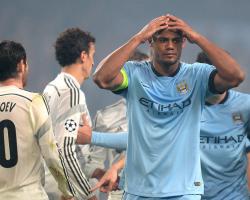 Man City 2-1 Swansea: Match Report - view commentary, squad, and statistics of the game as it happened.Toure takes on City challengeYaya Toure responded to Manuel Pellegrini's rallying call as he fired champions Manchester City to a 2-1 Barclays Premier League win over Swansea.The City midfielder, below par for much of the season but continually backed by boss Pellegrini, powered forward to strike the winner just after the hour at the Etihad Stadium.City had needed to respond after Wilfried Bony struck early for the visitors with a sublime piece of skill inside the area

Stevan Jovetic grabbed the equaliser before City upped the tempo and Toure, in typical style, charged forward to settle the contest.The result eased some of the anxiety at Eastlands after just one win in the previous six games in all competitions.Toure was at the heart of the victory, coming good after being sent off on his last appearance at the ground - the dismal Champions League loss to CSKA Moscow.The Ivorian had been rested after previous international breaks but, as he is suspended for Tuesday's clash with Bayern Munich, Pellegrini had challenged him to reproduce his best.He may not have reached previous heights but it was a highly encouraging display.The opening to the game was tame, however, and the first half was scrappy throughout, although Swansea took the lead after nine minutes with a moment of high-quality attacking play.Nathan Dyer, returning to the side after injury, took a pass from Bony and then improvised to return it to the Ivory Coast striker with a clever flick into the area.City's marking was slack, as the hosts offered Bony plenty of space, but the Swans man showed fine skill to control with his chest and then clip a shot past Joe Hart.The game remained at low tempo but City pieced together a fine move of their own to level the scores 10 minutes later.Toure pushed forward and fed Jesus Navas out wide

The Spaniard curled an inviting low ball into the area and Jovetic stuck out a leg to divert past Lukasz Fabianski.The goal fired up the home crowd for the first time and Jovetic urged them to make more noise as he ran away in celebration.But still the general quality did not improve and referee Neil Swarbrick booked Kyle Bartley for a clumsy challenge on Sergio Aguero.That pair were involved in another moment of controversy moments later

Aguero went down holding his head after an off-the-ball collision with Bartley and was told to get up by Angel Rangel.Aguero took exception to this and Swarbrick needed to step in to avert a confrontation

After more players arrived on the scene the official needed to talk to captains Vincent Kompany and Ashley Williams to calm the situation.As play finally settled down, City began to assert their superiority.Fabianski produced a fine fingertip save to touch a powerful Gael Clichy drive onto the post and Jovetic then shot from distance straight at the Polish keeper.Swansea made a lively start to the second half with Jefferson Montero breaking through but Hart was quick off his line to smother the shot.Hart did have an uncomfortable moment at a corner and then had to save from Glyfi Sigurdsson but Swansea gradually started to get pushed back.Aguero had a shot deflected wide and Montero needed to get back to put a dangerous Navas cross behind for a corner

Pablo Zabaleta powered forward and drove a shot narrowly over the bar.The goal City were threatening came just after the hour as Toure combined with Fernandinho

The pair exchanged passes and Toure took the Brazilian's backheeled return in his stride to drive into the area and poke the ball past Fabianski.City pressed on in an attempt to make the game save with Aguero having another effort blocked and Jovetic curling an attempt just wide.Swansea did get further opportunities from a Sigurdsson free-kick and with Ki Sung-yueng and substitute Jonjo Shelvey pushing forward, but City repelled the threat.Navas could have killed the game after a swift City counter-attack but Fabianski saved well with his feet and James Milner also had a good chance blocked.City might have paid for those misses had Bafetimbi Gomis made more of a late chance but the substitute was hurried into shooting wide