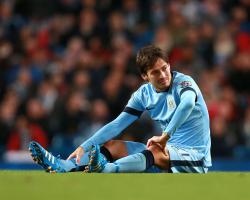 Man City 1-0 Man Utd: Match Report - view commentary, squad, and statistics of the game as it happened.City extend derby dominanceCity underlined their status as kings of Manchester after Chris Smalling handed them three points on a plate with two moments of madness at the Etihad Stadium.Sergio Aguero scored his 12th goal of the season to hand City a 1-0 victory over their bitter rivals Manchester United, but their task was made a lot easier thanks to Smalling's dismissal for two silly fouls.The England defender earned his first booking on the half hour for blocking Joe Hart's attempted clearance from point-blank range and less than 10 minutes later he was shown yellow again for a reckless foul on James Milner.The victory means City have now won four Manchester derbies on the bounce - something that had not been achieved for 44 years.It had been suggested before the match that City's recent poor form meant they no longer enjoyed the supremacy over United that they had enjoyed since Sheikh Mansour started pouring cash into the club.But this result, which puts City seven points ahead of their cross-city rivals, suggests otherwise.City failed to show the same killer instinct that Chelsea have shown for most of the year, but they probably should have had at least one penalty.Michael Oliver waved away shouts for fouls on Yaya Toure, Aguero and a hand ball by Daley Blind - among others.The result means Manuel Pellegrini's three-match winless streak has now come to an end and the Blues are within two victories of the Barclays Premier League leaders with over a quarter of the season gone.Louis van Gaal never looked like winning his first Manchester derby once Smalling was sent off and his team lacked a cutting edge up front despite the return of Wayne Rooney.Van Gaal's lack of options at the back was clear throughout