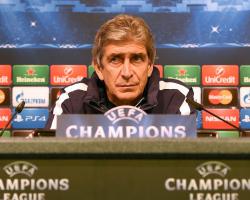 Man City 1-0 Everton: Match Report - view commentary, squad, and statistics of the game as it happened.City win - but concerns for Aguero An injury to star striker Sergio Aguero cast a shadow over champions Manchester City's laboured but vital 1-0 win over Everton.Yaya Toure struck a first-half penalty as City cut Chelsea's lead at the top of the Barclays Premier League to three points but the immediate concern was for top scorer Aguero.The Argentinian appeared in tears after hurting his knee in the second minute of what proved a dull contest at the Etihad Stadium, giving City a major Champions League fitness scare.City travel to Roma for their decisive final group game on Wednesday.They are already without Toure for the trip due to suspension while two other key players, Vincent Kompany and David Silva, require fitness tests.An injury to Aguero, who has already scored 19 goals this season, is the last thing they needed.He went down clutching his knee after a challenge by Muhamed Besic and his lack of movement immediately suggested a serious problem.He limped halfway round the field and headed down the tunnel, leaving City anxiously awaiting news of his condition.Edin Dzeko, back on the bench after a calf injury, initially seemed the man to take his place but manager Manuel Pellegrini opted to give youngster Jose Pozo a chance in the lone front role.The intention had been for Aguero to operate ahead of a five-man midfield, which featured the returning Fernando in place of Fernandinho, who did not even make the bench

Eliaquim Mangala also came back from suspension into a defence which was still missing influential captain Kompany.The loss of Aguero dampened the atmosphere and City were flat

Mangala and Fernando were both booked for jumping into challenges with high feet, on Samuel Eto'o and Gareth Barry respectively, as the contest lacked any fluency.It was not until the 20th minute that City first seriously threatened but Toure dragged a shot well wide.The picture changed soon after when referee Andre Marriner pointed to the spot after a coming together between James Milner and Phil Jagielka in the area.Milner went down but quickly got up and did not appear to be looking for a penalty, but Marriner felt he had been impeded.Toure did not argue and rifled home the spot-kick.Despite that, the goal did not provide the spark the game perhaps needed as a spectacle.Chances were few and far between, although Samir Nasri created a good opportunity with a nice turn - only for Sylvain Distin to get his head in the way.At the other end Kevin Mirallas had a volley deflected wide as he latched on to a Pablo Zabaleta clearance.City had another injury scare when Toure hurt his knee, also after being challenged by Besic, but he soon ran it off.Pozo had a glorious chance to double the hosts' lead early in the second half after fine work by Milner down the left

The 18-year-old Spaniard looked certain to score as he was picked out by the England international in front of goal but Tim Howard, sent the wrong way, somehow saved with his feet.Pozo cursed his luck and Pellegrini did not give him much longer to make an impression as he decided Dzeko needed a run-out for the final half-hour.Eto'o threatened an equaliser as Everton, with Ross Barkley introduced off the bench, tried to force themselves back into the game but his effort was deflected wide.City sent on Frank Lampard in the hope of finding extra impetus and the veteran midfielder made an instant impact

Lampard picked out Dzeko with a fine crossfield pass and the Bosnian's nod-down fell nicely for Milner - but he miscued his volley.As the game went into the last 10 minutes England number one Joe Hart showed why he is poised to sign a lucrative new deal with a fine one-handed save to keep out a powerful Romelu Lukaku volley.Nasri shot at Howard as the game threatened to open up in the latter stages but City eventually closed it out.Milner needed treatment after a nasty blow to the head when former team-mate Barry caught him with his arm in the last minute - but there appeared no serious injury