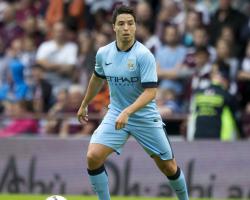 Man City 0-2 Newcastle: Match Report - view commentary, squad, and statistics of the game as it happened.City shocked by flying MagpiesRolando Aarons and substitute Moussa Sissoko struck as Newcastle dumped holders Manchester City out of the Capital One Cup with a 2-0 win at the Etihad Stadium.To compound City's woes, as manager Manuel Pellegrini's decision to field a strong side just four days before a Manchester derby backfired, key playmaker David Silva limped off injured early on.But after a dismal start to the season, Newcastle and Alan Pardew are suddenly enjoying a mini-revival with three successive wins all competitions easing the pressure on the under-fire manager.Aarons stunned City when he capitalised on poor defending early on and the hosts, despite controlling possession and creating some chances, never truly convinced.Newcastle were denied what seemed a clear-cut penalty in the second half but Sissoko finished the job 15 minutes from time, loosening City's grip on the trophy with a fine finish.Pellegrini's men have now gone three games without a win and need to regroup with two big games in the next week against United in the Premier League and CSKA Moscow in the Champions League.Losing Silva, who was surprisingly not granted a rest along with likes of Joe Hart, Vincent Kompany and Aguero, made for a dismal start.Silva was injured when fouled by Ryan Taylor, making a welcome first Newcastle appearance in two years after overcoming cruciate ligament trouble, on the edge of the area.The Spaniard looked in considerable discomfort and left the field for treatment as Yaya Toure blazed the free-kick over the bar.Silva did return in an attempt to run off the knock but soon admitted defeat and made way for Samir Nasri to return to action after seven games out with a groin injury.But Pellegrini could not make the change before Newcastle claimed a shock lead.Taylor was again involved, robbing Fernandinho and releasing the pacy Aarons, who showed no ill effects from his recent hamstring problems as he burst through to slide a shot past Willy Caballero.Aarons caught City's defence out again with another lively break and he was only stopped when Bacary Sagna clumsily hauled him back on the edge of the area for a free-kick that came to nothing.Stevan Jovetic went close to an equaliser after being picked out by a Nasri cross but Rob Elliot blocked with his feet on the line.Jovetic drove another shot wide and City went even closer when Fabricio Coloccini diverted an Aleksandar Kolarov cross onto his own post with a miscued looping clearance.Jovetic spurned another opportunity and City were almost made to pay for their profligacy as Paul Dummett was left unmarked at a corner and forced Caballero to make a scrambling save.Toure may have been the cause of more anxiety before the break as he went down under a Dummett challenge and took time to get up.But he was soon back in action and drove a shot at Elliot as City finished the first half strongly.Yet despite dominating possession, City struggled to summon up their usual intensity.They did show some creativity from a free-kick early in the second half but nobody was able to get a touch on a Kolarov cross.Newcastle put the ball in the net again when Gabriel Obertan slammed a shot past Caballero but the flag was raised for offside.Eliaquim Mangala's tribulations since his B#32million summer signing from Porto continued and he was fortunate to escape censure after catching Mehdi Abeid with his arm in a clumsy challenge.City got another lucky break soon after when Kolarov slid in and appeared to clip the heels of Obertan as he raced into the box

Referee Stuart Attwell gave nothing and Pellegrini tried to make the most of the reprieve by sending on Aguero for the presumably tired Nasri.But City's crack striker had no time to make an impact before a Newcastle substitute stole the show.Sissoko, who entered the fray just after the hour, took possession outside the area and weaved his way past Fernandinho and Sagna before clipping shot past Caballero.City made a late effort to get back into the game but Taylor completed a satisfactory return by blocking from Edin Dzeko on the line