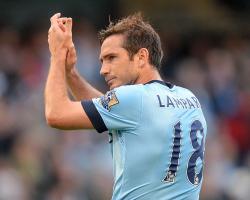 Midfielder Lampard signed for Major League Soccer side New York City following his release by Chelsea, only to make a surprise return to the Barclays Premier League with the champions, who along with New York Yankees baseball team purchased the MLS expansion franchise

The good form of the 36-year-old, who scored twice in the midweek 7-0 Capital One Cup win over Sheffield Wednesday to add to the goal against his former club, has led to speculation City will look to extend the loan stint which currently runs to the start of January

The 2015 MLS season is set to start again in March, and Lampard insists there have not yet been any discussions with City over his future past the end of the year

Wenger, who brought former Gunners captain Thierry Henry back from New York Red Bulls during the MLS close season in January 2012, believes any extension of Lampard's current arrangement might not sit well, even if it would be within Premier League guidelines

"You always have two judgements, one is moral and one is legal and it just depends what you consider," said Wenger

"I think 'is it legal?' You have to respect it after that and the player has to deal with his decisions

"I don't really know (what) is behind all that

"Was it always his plan to go to New York and go to Man City? I am not sure

"I genuinely think he wanted to go abroad and to New York, and (then) suddenly was offered this solution to come back to the Premier League and he took it

"He could explain that much better than I do, I don't know what is behind that."