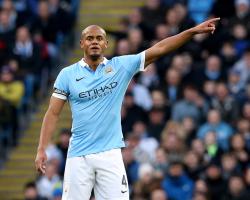 Kompany initially says the injury is "not serious" and his substitution is "just a precaution" but he does not play again for a month.

He does not appear in the first of them and comes on only in the 89th minute in the second.

Plays 90 minutes in a goalless draw at Aston Villa but just days later he pulls out of the Belgium squad as a precaution, citing more calf trouble

He ends up missing City's next eight games.

Returns to action as a 62nd-minute substitute against Sunderland, but his comeback lasts just nine minutes

He suffers a bad reaction and does not play again until February 14.

Pellegrini says he will be out for a "minimum of one month".