Toure would be honoured to play for PSG 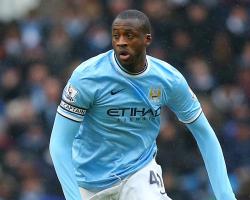 Over the last week it has emerged all is not well with the Ivory Coast midfielder after his agent complained the player was not respected enough by the club's hierarchy, even suggesting the 31-year-old was unhappy his recent birthday was not marked properly.

Dimitry Seluk said last Tuesday he rated Toure staying at City as "50-50" and the player's comments about PSG will only increase speculation he is looking to move on.

"Given the goals of Paris, how could you not be interested in a club like that?" Toure told France Football.

"PSG have become one of the strongest teams in Europe

In the interview, the midfielder did little to play down suggestions a summer move could be on the cards.

"Given the magnificent season Manchester City have had, everyone talks about me and everything is open," he added.

"My agent, Dimitry, is hanging on the telephone and he knows what he has to do, I have complete confidence in him.

"Nobody knows what can happen tomorrow, my attention is on the World Cup and we will see afterwards.

"Yes, I have said I would like to finish my career at Barcelona

Seluk reiterated his view from last week that Toure should be offered a job on City's backroom staff when he finishes playing.

"A role at City after his (playing) career? Of course

Like Real Madrid have done with (Zinedine) Zidane, for example," he said.

"Zidane played there and afterwards began working for the club.

"Yaya will need a club in the future

We do not want more money or a longer contract, anything like that, just the right attention.

"More attention on Yaya, and that he feels happy at the club, that is the most important thing.

"I will tell you one more time, we do not need more money."