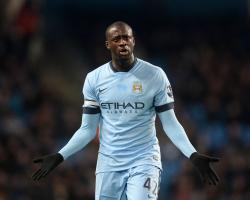 The Ivory Coast midfielder's agent Dimitri Seluk told Sky Sports News he was "90 per cent certain" Toure would leave City after five years at the club.

Inter Milan, managed by former City boss Roberto Mancini, are among the clubs who have been linked with a move for Toure, who has scored eight goals in 26 Premier League starts this season.

Seluk told Sky Sports News that three clubs were pursuing Toure and that he was in the UK hoping to meet City to discuss the former Barcelona midfielder's future.

Toure is 32 on May 13 and last season his birthday led to speculation he would leave City, with whom he signed a four-year contract in April 2013.

Seluk has a reputation for making outlandish claims and a track record of threatening his client's exit from clubs.

He has done so previously at City - including criticising the hierarchy last month - and also at his previous clubs, notably Barcelona.

Seluk said in May 2014 that City had not made Toure feel valued and appreciated, especially on his 31st birthday which clashed with a party in Abu Dhabi to celebrate City's title triumph.

Seluk insisted it was "not a question of money or contract", but the two-time Premier League winner stayed at City.

City boss Manuel Pellegrini has often insisted Toure is happy at the club, but the team talisman last month spoke of being open to "new challenges".

Toure, who is reportedly City's highest earner on ÃÂ£220,000 per week, told Foot Mercato: "No amount of wages will make me stay at a club if I feel that I no longer belong there or if no challenge exists for me.

"For the future, I don't know more than you do, because I will always go where I am offered new challenges

That is in my nature."

Addressing those comments, Pellegrini said Toure can find the challenges he craves at City.

Pellegrini said: "There are a lot of different places you can have it but City also is a challenge and I am sure Yaya is very happy here.

"Maybe you cannot win titles every year but I think the project of the club is to improve the squad, to improve as a club so there are a lot of important things and I think it is an important challenge."