Toure declares himself for City run in 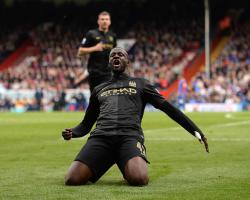 The Ivory Coast midfielder was substituted midway through the second half of the 3-2 win over Everton, raising some concerns about his fitness.

Toure has now confirmed, however, that there had been no flare-up of the muscle injury suffered against Liverpool in the middle of April that threatened to end his campaign

The early departure at Goodison Park was a protective measure to make sure he was in the best shape for the games against Aston Villa on Wednesday and West Ham on Sunday.

He told the club's website: "It was very important I came off (against Everton)

It has been difficult for me in a short space of time to recover from the injury I picked up at Liverpool and prepare physically.

"If you are not fully prepared it is very tough, because you have to be at 100 per cent for these games and coming back is always difficult, especially at the end of the season, but I feel good."

Toure added that Villa and West Ham will be looking to "enjoy" themselves after securing top-flight status for next season and that City must be at their very best.

"Both Aston Villa and West Ham are sharp and will come to just enjoy the games, but we have a league to play for," the 30-year-old said.

"I hope we complete the job, but it depends how sharp we are, how we prepare mentally and physically.

"Our target was always to win something, but for us the League Cup is not enough

The Premier League was always our target, so now we need to do be at our optimum levels when Aston Villa come to our stadium on Wednesday."

"We have worked so hard this year and, if we don't win, it would be a massive disappointment for us, for the fans and for the club as well."