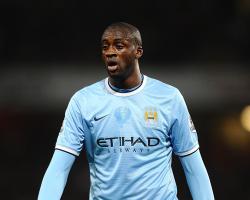 City's 3-2 win at Everton put them in control of their own destiny and meant Toure's brother Kolo and his Liverpool side - favourites for the championship before last weekend - are unlikely to win it without help from other teams.

The Reds play their penultimate match of the season at Crystal Palace on Monday night and, while victory there would take them three points clear at the top of the table, City have two games still to play and a superior goal difference.

"Oh yes, it's been really difficult

You can't imagine how difficult," Yaya Toure said of the fight within the family.

"Your family have to try to be balanced - they are divided

Sport is unbelievable in that it can break hearts.

It would be amazing for him.

I will only lose if someone is better than us.

"But it's still so tight - Liverpool still have a chance and so do Chelsea - they beat us twice, don't forget

It's going to be exciting.

"The family don't want to choose a side

We don't know how it will end.

"They just say 'the best team will win it'

They know that both teams have the quality to do it so let's wait and see."

City have been here before, of course - famously winning the title on goal difference with virtually the final kick of the 2011-12 season.

That experience will stand Manuel Pellegrini's side in good stead as they seek the two wins at home to Aston Villa and West Ham which should clinch a second title in three years.

Asked whether City would be happy to win it by a similarly tight margin again, Toure added: "Of course we would

We know at this club how important goal difference is.

"But I don't want to live through something like that again

Going right to the last minute - it was unbelievable.

I hope this time, in these two games, we can make a difference earlier and get the wins early.

We need to be sharp

We need to be ready.

"We need to be well prepared for these games and not make it so close as last time.

"But we cannot just think we will finish on top

"Even if teams are defending they can go on the counter-attack and score goals.

"We are aware of that but with the players we have and the experience we have of 2012 we can keep on going - we are just two games away."

Last weekend Toure missed out on the Professional Footballers' Association player of the year award after it went to Liverpool striker Luis Suarez, who has 30 league goals this season.

The Ivory Coast international, who has scored 19 league goals from midfield, claimed in the lead-up to the ceremony African players were undervalued and if he was South American he would have received far more recognition.

So was he disappointed not to have won the PFA award?

"To be honest I was, because I'm a competitor," he said.

"But as well, Suarez had an excellent season

He was also very good

It was well deserved from him.

"The most important thing is trophies for the team

We always remind each other of that