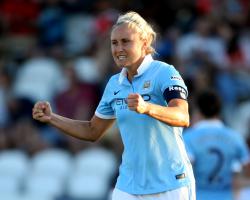 Arsenal beat Reading 3-1 in the opening day's other game.

City looked set to have to settle for a point after a game in which both teams missed penalties, Jess Clarke for County and Toni Duggan for the reigning champions.

But Houghton's free-kick from 30 yards a minute into added time ensured all three points for Nick Cushing's side.

"We always go to the end," said Cushing

"I think the team really pulled together and wanted the goal and I think a draw would have felt like a loss."

Nigeria forward Asisat Oshoala scored early in the second half of her Arsenal debut, after Dominique Janssen had given them an interval lead.