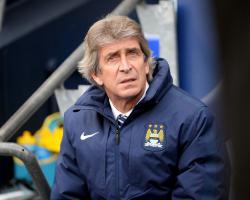 City crashed out of the competition at the fourth-round stage as promotion-chasing Sky Bet Championship side Boro pulled off a shock 2-0 win over the Barclays Premier League champions at the Etihad Stadium.

It was a result that raised further questions about the wisdom of City's decision to return from their warm-weather training camp in Abu Dhabi - where they played a midweek friendly against Hamburg - less than 24 hours before the game.

Pellegrini emphatically denied any suggestions of complacency, or that travel was a factor in City's disappointing display, but it was nevertheless a dismal afternoon for the Chilean.

Much can be put right with victory at Stamford Bridge next Saturday but, after last weekend's loss to Arsenal, City can ill afford defeat in a game of critical importance.

"I am going to start working on that game," said Pellegrini, whose side trail the Londoners by five points at the top of the table

"We don't have any problem with motivation

I think we are going to work hard and I hope we can win that game at Stamford Bridge."

The problem for City is that the momentum they built up in November and December, when they won nine in succession in all competitions, has been lost.

Pellegrini's men are without a win in three, have not kept a clean sheet in seven and have not scored in their last two.

We need to try to recover our performance in attack and in defence."

The inquest would not have been necessary had City not been denied on numerous occasions by Middlesbrough's inspired former Real Madrid goalkeeper Tomas Mejias.

Seizing an opportunity to play, Mejias produced a string of superb saves to keep City at bay in the first half as the hosts showed not a hint of lethargy.

His performance allowed Middlesbrough to grow in confidence after the break and Patrick Bamford's opener in the 53rd minute, following a mix-up in the City defence, changed the complexion of the match

Lee Tomlin hit the post soon after as the visitors threatened a second.

City still almost snatched an equaliser as substitute Frank Lampard saw a shot deflected against the post in the 89th minute but Kike made victory certain in injury time.

That didn't happen and as soon as we conceded the unlucky goal it was hard.

It didn't want to go in

The speed of the game was good