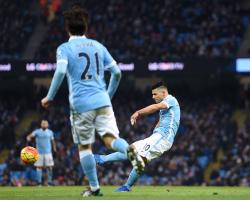 Fabian Delph and David Silva were also on target as City got back to goalscoring form at the Etihad Stadium after Wednesday's frustrating Barclays Premier League stalemate with Everton.

Palace had some good early chances but the result was never in doubt after City took control with goals from Delph and the impressive Aguero in the first half.

As snow fell after the break, Aguero's second on 68 minutes made the result certain before the striker selflessly passed up a hat-trick chance to tee up the fourth for Silva.

The result left Palace without a win - or a goal - in five league games.

Iheanacho, the highly-rated Nigerian who scored the winner off the bench at Selhurst Park in September, had made just one previous league start but earned his chance after impressing in the FA Cup last weekend.

The 19-year-old's inclusion alongside Aguero meant a switch to 4-4-2, and that initially appeared to favour Palace and their packed midfield.

The visitors were able to get balls into the box and Joe Hart had to be alert to keep out a powerful header from Damien Delaney in the second minute.

Scott Dann also had two opportunities with free headers and City had another escape when Hart kicked the ball straight at James McArthur attempting to clear and Delaney put the rebound over.

City took time to gain a foothold in the game but Silva served warning by shooting wide before Delph struck the opener after 22 minutes.

The goal came out of nothing, with Delph appearing to have little on as he took aim from 30 yards, but Wayne Hennessey could not keep out his low shot.

Palace responded with Yohan Cabaye's free-kick well saved by Hart but City threatened again as Iheanacho missed his kick in front of goal and Aguero almost found the target with a shot off the ground after slipping.

Aguero did strike four minutes before the interval, scoring after casually taking aim from outside the area, although he needed a big deflection off Dann's head to deceive Hennessey

The Argentinian had another effort deflected over just before the break.

City suffered a blow early in the second half as Aleksandar Kolarov was carried off injured.

Palace appealed unsuccessfully for a penalty after a Fernando clearance struck Martin Demichelis' hand, and Joel Ward then cut inside to shoot wide.

But City soon tightened their grip with a nice team goal

The Belgian pulled the ball across goal and Aguero had a simple tap-in for his second.

De Bruyne released Aguero from inside his own half and he outpaced the backtracking defence to set up an easy finish for Silva.