Rest is Hart-stopping for City keeper 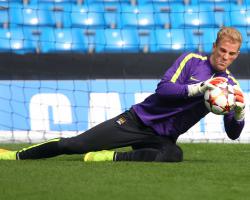 Hart was replaced by pre-season signing Willy Caballero for Premier League champions City's 4-2 win at Hull at the weekend but has been widely tipped to be restored to manager Manuel Pellegrini's starting side for the European tie at home to Italian side Roma.

The 27-year-old Hart was briefly dropped last season after several high-profile errors but regained his place -- one he doesn't want to lose for any reason, including being rested.

"It is hard for me to see it that way," Hart told a news conference on Monday

"I am sure when I retire from football I will see them, but right now I am not going to see them.

"Of course I want to play every game, that is my nature, my professionalism

I am not the manager, just a player

I live by the decisions of the manager.

"We have always had good goalkeepers, David James, (Andreas) Isaksson, Kasper (Schmeichel), (Costel) Pantilimon, it has always been a fight for me to keep my place and that will continue, but I have always had high standards that I will keep to, whether there is one goalkeeper or 20

I love the challenge."

Tuesday's match at Eastlands is set to see Hart playing against former England team-mate Ashley Cole, who moved from London side Chelsea to Rome in pre-season.

But Hart said he was in no hurry to play club football abroad.

"I have got a lot of respect for what the boys have done, Micah being closest to home for me," he explained

"He seems to be loving it out there, but right now I am happy with what is going on at this club

We are fighting on all fronts

"While I am welcome here, I am more than happy to stay here and see where that takes me."

Roma have made a superb start to the season, winning all five of their opening Serie A matches and thrashing Champions League group rivals CSKA Moscow 5-1.

That makes them formidable opponents for a City side who conceded a last-minute winner to Bayern Munich in their opening European match.

Hart added: "It is obviously a big game after a disappointing start in Munich

We have to build on it especially at home and we are going in trying to win the game.

"They (Roma) have been doing very well

We have focused a lot more on them since drawn in our group, they got a great result in matchday one

"Every game is tough in Champions League, but we are up for it and more than capable of winning."