Red meat off the menu for Aguero 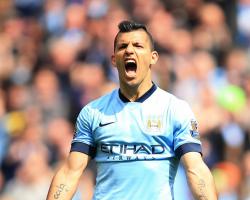 The prolific Argentinian took his goal tally for the season to 31 from 40 appearances with a hat-trick in Sunday's 6-0 Barclays Premier League thrashing of QPR.

Aguero has bounced back well from the calf and hamstring injuries which ravaged the second half of his 2013-14 season - a campaign in which he still scored 28 times - and ruined his World Cup summer.

He was eased back into action by City this term, starting on the bench for the first two league games, and the rewards have been spectacular.

The 26-year-old has still had his injury issues, missing seven games with a knee problem in December and January, but he generally feels fitter and stronger than in the past.

He puts that down to a complete overhaul of his training regime, including his diet, and he intends to maintain it.

Aguero said: "I had to change a lot of things, starting with my food

I needed a healthier way of life.

"I went to a doctor in Italy and he checked everything we did, and I had to change quite a bit - no more pasta, no more sugar and no meat, which I used to eat quite a bit because Argentinian meat is very good.

"Hopefully, this season has proved that it has worked

Touch wood, I haven't had any muscle injuries, only the knee problem.

"In training sessions I was struggling a little bit last season

For example, after every three training sessions I had to stop.

"I have improved in that and now I hope I can stay like this until the end of my career."

Aguero's lay-off in the winter robbed City of a world-class striker for more than the games he missed, as it took him six more to rediscover his scoring touch after returning to action.

That meant a quiet spell of two months, a factor which might have been significant in City's failure to defend the title.

It might also explain why Aguero failed to make the PFA's team of the year, with the voting period having overlapped with his lull.

But, having missed out on them before, personal accolades are not an issue for Aguero

He says all that matters is improving his standards and winning trophies with the team.

He said: "It also happened in the season when I scored 23 goals and we won the Premier League and I didn't get the Young Player of the Year award.

"My job is just to keep working as hard as I can, and keep scoring goals

I expect to do the same again next season but what I really want is for City to win titles."