Puyol thinks Guardiola will be an asset to EPL 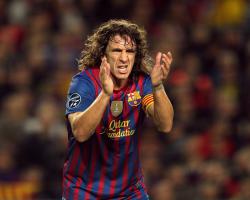 City have secured one of the world's best coaches and Guardiola boasts a medal-laden CV, having led Bayern Munich to a hat-trick of Bundesliga titles after winning three LaLiga crowns and two Champions Leagues with Barcelona.

Puyol was captain throughout his time at the Nou Camp and believes this next chapter will not only benefit City but everyone across English football.

"I think he is going to do a great job," the former defender said.

"He has been a great coach for us. I appreciated working with him.

"I think they play somewhat differently and therefore he might bring new techniques to them, which could be very beneficial for the Premier League."

Guardiola's arrival adds an extra ingredient to what promises to be a fascinating Premier League campaign as the big names look to make amends following a shock season.

Their struggles allowed Leicester to rock the footballing world and become champions - a remarkable achievement which seems even more unlikely in LaLiga due to Real Madrid and Barcelona's dominance.

Atletico Madrid have threatened that duopoly in recent years and Puyol has not ruled out a similar situation arising in Spanish football one day.

"Well, you never know," he said regarding a Spanish-style Leicester story, speaking at the Spanish Embassy in Paris.

"And all of a sudden this little one just sprang up, so you never know. It can happen anywhere, really.

"It depends on the context and you just have to wait and see, I guess."