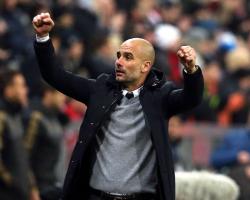 The Juventus midfielder has been successfully identified as a half-decent prospect by Pep and he intends to make him the centrepiece of his Etihad vision.

Pogba himself has been making positive noises about the prospect of working with Guardiola ahead of the Champions League tie between Juventus and Bayern Munich:

"He is a coach of with a lot of experience and has a great game philosophy," he said.

"Therefore, he always has a great influence on his team

All the players respect him

IÃâve heard that he improves every player

He is a football icon.

"Right now I am still with Juventus, but clearly if you have chance to work with someone like him, you can only develop further."

The addition of Paul Pogba next season will likely have a lot of variables attached but will likely by a marker for the 'Pep' factor.