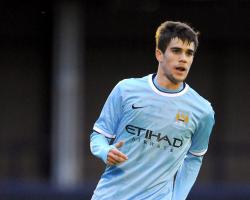 The 18-year-old striker came off the bench in the 64th minute of City's Capital One Cup tie against Sheffield Wednesday and netted the sixth goal in a 7-0 win.

"It is a dream to make my debut and also score," said the teenager

"I am very happy for this."

Pozo joined City two years ago from Real Madrid's academy and has earned the nickname 'Mini Messi' for his exploits.

His goalscoring has made him a star of City's youth teams and his first-team debut might have come earlier but for an ankle injury that ruled him out for most of last season.

But being told he has been compared to Barcelona superstar Messi drew a wide-eyed look from Pozo, who said: "This is crazy

Messi is the best player in the world and I have only played one game for the first team."

City boss Manuel Pellegrini revealed before the match against Wednesday that he was considering giving Pozo his chance, with Sergio Aguero, David Silva, Samir Nasri and Stevan Jovetic all struggling to overcome niggles.

Pozo certainly took his opportunity and will now hope to be given an opportunity in the Premier League.

He said: "Last year was very difficult because I played only five or six games before my injury

I know I am an Under-21 player but I have an opportunity and I'll try to do my best.

"I have been working with the first team for two weeks

I didn't expect anything

I was just working, waiting for my opportunity."

Many clubs were chasing Pozo's signature and Real were reluctant to let the teenager leave.

He has no regrets, and said: " Some people asked why I moved from Real Madrid to here but it is football

I am very happy

Also here it is difficult

"I think City has very good plans for the future."

Those plans could yet include two Pozos on the pitch, with the striker's younger brother Iker also on the books.

Pozo thinks Iker has even more promise, saying: " My brother plays for the Under-14s

He is very good

I think he is a very quality player."

"Pozo is a really good prospect for us, he's a player we believe in a lot," said the City boss

But he has shown a great level presently

I'm sure he will continue in the squad."

City also hit the woodwork twice, through Eliaquim Mangala and James Milner, with the latter unlucky to miss out on man-of-the-match honours to Lampard

"I'm not impressed because I know what James Milner can do," said the Chilean

"I think he's a player that always works 100 per cent every day, whether he's in the starting XI or not