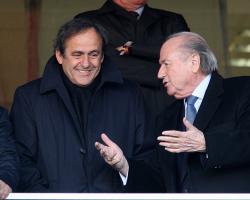 City will have a heavy fine, a reduced Champions League squad and a limit on transfer spending for next season, while Paris St Germain have been given the same sanctions.

We have to follow the regulations but I think it's an historical moment and a good moment for football.

"My wish is not to kill the clubs

We have fair play to help the clubs have better governance

I'm not the person who decides..

but I think it would be a big mistake if we banned the clubs because financial fair play is to help them - not to kill them."

Meanwhile, Platini said he was still considering whether to run for the FIFA presidency but that he expects Sepp Blatter to stand for another term.

He added: "After the World Cup, it will be enough to think about that

I have all the World Cup, all the holidays, to think where I want to stay in the future.

"It's not clear in my mind

My problem is where I want to go

Where I want to be

If I want to be in FIFA, I will run for FIFA

Platini and Blatter have been exchanging jibes over recent months but the UEFA president insisted their personal relationship still remained good.

He said: "I have no problem with the man

I have known him a long time.

"I supported him when he became president in 1998

But we have different matters

Football in Europe is not the football in the world

When he take a decision for the whole world, sometimes it's not good for the European football

We fight on ideas

Where is the problem? We have to fight on ideas."