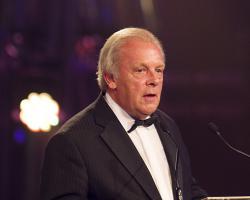 PFA chief executive Gordon Taylor met Jon Cruddas, the MP leading the Labour Party's policy review, on Monday to push the union's position aimed at increasing the number of English players at the top of the professional game.

Taylor also plans to meet the Government to argue the case for quotas of home-grown players, with each starting XI having four with at least one trained by the club

It would need the agreement of the Football Association, the Premier League and the Football League to bring in the rules, but winning political support from the main parties would be a big boost to the PFA.

Taylor said FA chairman Greg Dyke's announcement of moves to reduce the number of non-European Union players in English football was welcome but "a drop in the ocean" and that radical action is needed.

Taylor told Press Association Sport: "The key is starting on the field of play and to have at least four home-grown players of which one should be club-grown

With so much money going into youth development we need to see some return from that.

"Look at Sunday, there were only four English players in the Manchester City v Chelsea teams and the best player on the pitch was one of them, James Milner.

The fall-out rate has been so high that if we were a university we would probably have been closed down.

"Unless we tweak the system with regards to quotas I don't see how that's going to improve.

"Earlier this month I saw England Under-19s draw with the German Under-19s who were the European champions - we were the best team and I was so impressed but you wonder what opportunities they are going to get in senior football.

"We will also be approaching the current Government on these issues as well."

Taylor also wants political support for the PFA's backing of the 'Rooney rule' to encourage more black and ethnic minority coaches - there is only one black manager in the 92 league clubs, Chris Powell at Huddersfield.

The 'Rooney rule', used in American football, would oblige clubs to shortlist at least one black/ethnic minority candidate for each coaching position.

Taylor is also pushing for the FA board to include representatives from the PFA, fans and the League Managers' Association.

The PFA chief said the FA's move to toughen up the work permit rules for non-EU players was to be welcomed but would only have a very limited effect on the number of English players in the top flight.

He added: "The fact is there are so many countries that are either in the EU, or have trade agreements that are permit-free, and then you have Argentinian players with passports from Spain and Italy, and Brazilians with Portuguese passports.

"It's just going to be a drop in the ocean."