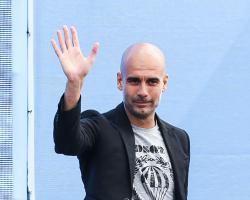 A number of senior players - including Samir Nasri, Fabian Delph, Wilfried Bony, Yaya Toure and Fernandinho - returned to the City Football Academy for the start of pre-season training this week.

Tuesday's session was overseen by Guardiola, with the club posting a gallery of images online as the Spaniard put players through their paces.

Guardiola was joined by his coaching team, which includes former Arsenal and Everton midfielder Mikel Arteta, who retired at the end of last season.

City officially unveiled former Barcelona and Bayern Munich boss Guardiola as their new manager at a specially arranged fans' event at the weekend.

The 45-year-old is due to hold his first press conference since taking up the position on Friday.

City travel to China later this month for the International Champions Cup, in which they face Borussia Dortmund and Manchester United.