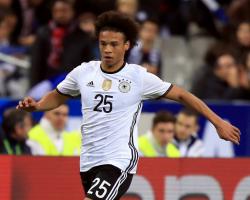 Guardiola says contact has been made but the two clubs differ in their valuation of the Germany international, with Schalke reportedly seeking ÃÂ£45million.

Sane, 20, has indicated a desire to leave Schalke but has been linked with Bayern Munich and Real Madrid as well as City.

Speaking at a press conference after City's pre-season friendly at Bayern on Wednesday, Guardiola said: "Sane is a player of Schalke

Of course we talk to him - Schalke know we are interested but at this moment we don't have many possibilities to get him."

Guardiola added, according to City's official website: "There's a difference between City and Schalke and it's quite big but I don't know what's going to happen in the coming weeks and months."

City are now travelling to China for the next leg of their pre-season preparations, and face games against Manchester United in Beijing and Borussia Dortmund in Shenzhen.