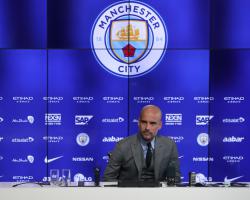 Here, Press Association Sport looks at some of the key messages to emerge from Guardiola's press conference.

We played many times against each other

My experience against him, against (Liverpool boss) Jurgen Klopp at Dortmund, a lot of coaches in Germany and Spain they made me better

It is going to be interesting

(Antonio) Conte is a master tactician, a great signing for Chelsea

It is going to be very interesting competing with him and Klopp, (Claudio) Ranieri and (Ronald) Koeman also, loads of coaches come to mind

On whether this is his greatest challenge yet

Every stage is a big challenge

I know how difficult it is in England to find a team to win four, five, six games in a row

It is not easy

Maybe that is the challenge, to try to be more consistent in our game

In the end that is good

It is better to live under that pressure

The way in Germany is completely different to Spain

I've never played one game in the Premier League, against Sunderland, against Big Sam

I am pretty sure it will be completely different in England

That's why I'm here, to see how it is and I have to adapt to my ideas to the quality of my players

In this mix we have to find each other, as soon as possible

There are two or three things that I'm going to change for the rest of my life as a coach, it will always be the same

After that, the details, it depends on the quality of the players.

Seriously, it was this one

Always I will be grateful for this club, for the people who trust me to join this country and the Premier League

The coaches sooner or later have to prove, sooner or later, what does it mean to play in the Premier League and Manchester City gave me this challenge, this opportunity and I will also be grateful for that.

They were criticised when they (England) lost

When they lost it does not depend on Sterling

I hear the last 10 days what happened, especially with Sterling

Of course he has a little problem that the money they paid for him is always in the mind of the people but I am curious, I am looking forward to working with him to try to help him, to show him how good a player he is and not just him, Joe Hart and the other English players

In Barcelona the basis was Catalan, Spanish players, in Bayern Munich the basis was (German players) and I would like to work with English players here but they are so expensive, more than the other players around the world

(People in) England know his quality maybe better than me

My dream for Vincent Kompany is to be fit

Especially in the last two years, he's played not too many games

The captain has a lot of experience, he's a magnificent central defender but he has to be fit

We spoke to him and said, 'Just focus on your body, forget about the other kind of things', to come back to what you were in the past

After that, Vincent will show his qualities.

On Yaya Toure, who was sold to City from Barcelona when Guardiola was manager there

I know Yaya for a long time

He did very, very well in Barcelona and here as well

Of course all the players that are here count on me

After that, we will see what happens in the future, not just in the case of Yaya

Yaya's here, I count on him.

I'm sorry, here is maybe not the right place to talk about new players, for respect for the players, for the other clubs