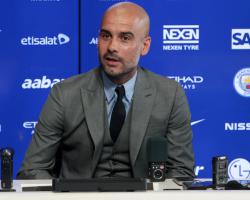 China is the unlikely setting for the rivals' first meeting since the 2013 Super Cup between Bayern Munich and Chelsea, with Beijing's imposing Bird's Nest Stadium playing host to the first-ever Manchester derby on foreign soil.

The pair endured a fractious relationship when managing Barcelona and Real Madrid, respectively, with the subject of that rivalry quickly arising on the eve of the International Champions Cup encounter.

Guardiola was quick to bat away questions over his relationship with Mourinho, though, and sees no reason why there will be anything but a "really friendly game" in the Chinese capital.

"We are polite guys," Guardiola said, looking surprised to be asked whether he would shake Mourinho's hand.

"Why not? Why should we not shake hands? No reason why

"I saw the last game against Borussia Dortmund (when United lost 4-1) and that's all (apart from) a little bit against Wigan.

"It's too early to know how they will be

I am pretty sure they will be stronger than last year.

"Of course with this manager and with the good players they already had - and I am sure they will buy new players - they will be a strong team."

It is the pitch in Beijing rather than old foe Mourinho and United that is of most concern to Guardiola.

Heavy rainfall over the past week has damaged the playing surface at the Bird's Nest, meaning City and United agreed to use the nearby Olympic Sports Centre in a bid to prevent damaging the pitch further.

An International Champions Cup spokesperson said the surface would be "fine", but Guardiola's concerns were as clear as they were understandable.

"We didn't see the pitch but there is a lot of water in the last days so we understand it's not in a good condition, but okay we're going to adapt and adjust," the City boss told a packed press conference.

"It's our second game of preparation

The most important thing is that the players are not going to be injured.

"We know the humidity for the training is not ideal but we also know that it's so important to come here to know the people and to play a good two games against amazing teams like United and Dortmund.

"We don't want to expend too much energy in training because of the humidity but we stay here, we play, and then go back to Manchester for two more weeks of preparation before the first official game."

Guardiola and midfielder Fernandinho were given towels during a sweltering press conference that offered little respite from the Chinese capital's heat and humidity.

Vincent Kompany was among those training on Sunday morning, albeit working away from his team-mates as the City captain looks to bounce back from a difficult run of injuries.

Guardiola confirmed the Belgium defender will not feature against United but was unwilling to put a date on his return to first-team action.

"The most important thing is for Vincent to get fit," he said.

"If it's for Sunderland, perfect

If it's against the defending champions, perfect

He has to get fit