Pellegrini- We will be fresh 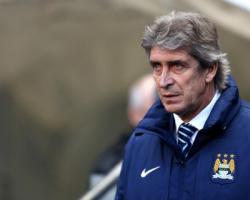 Their trip included a friendly against German side Hamburg but they were only due to return to Manchester the day before the visit of Sky Bet Championship high-fliers Middlesbrough in the FA Cup fourth round.

Some have questioned the wisdom of the mid-season venture given the travelling involved, but Pellegrini does not think the long-haul flight will adversely affect preparation.

The Chilean told the club's website, www.mcfc.co.uk: "We are not worried about the travelling element.

"There is only a few hours difference between and we will return to the CFA (City Football Academy) on Friday and prepare for the game as normal.

"It was the right time to have a break and we've enjoyed our stay in Abu Dhabi.

"Last January we played eight or nine games so it was important to have this time so we can return refreshed."

The trip may have come at a cost with former England midfielder Frank Lampard withdrawn 20 minutes into the Hamburg match as a precaution after suffering an injury in the warm-up.

That might make him doubtful for the Middlesbrough clash but the problem is reportedly not serious and Lampard is expected to be fit to face his former club and title rivals Chelsea next week.

The 21-year-old Czech Republic international, who is on loan from Chelsea, took a kick to the ankle during Tuesday night's 2-1 Sky Bet Championship victory over Cardiff and is being assessed.

Central defender Daniel Ayala came through the midweek game without picking up a 10th booking of the season, so is available, although midfielder Grant Leadbitter was cautioned for the eighth time and like Ayala, is closing in on a two-game ban.

Former England defender Jonathan Woodgate was an unused substitute against the Bluebirds and is in contention for just his second senior appearance of the season at the Etihad Stadium.

Emilio Nsue is away with Equatorial Guinea at the African Nations Cup, while fellow full-back Ryan Fredericks continues his recovery from a thigh muscle injury and Muzzy Carayol, Damia Abella (both knee) and Rhys Williams (Achilles) remain on the sidelines.

Karanka hopes his players can draw on their experience of playing at Anfield this season.

A trip to the home of the Barclays Premier League champions sounds a daunting proposition, but Boro showed in September that they are capable of holding their own against top-flight opposition when they pushed Liverpool all the way to penalties in the Capital One Cup.

It was 1-1 after 90 minutes at Anfield and 2-2 following 30 minutes of extra-time, as Patrick Bamford's 120th-minute penalty set up a shoot-out which Liverpool eventually won 14-13.

Karanka's men received plenty of plaudits for their performance against the Reds and the Spaniard hopes that experience will stand Boro in good stead when they travel to the Etihad.

''The best thing we can take from the Liverpool game is the personality we had,'' said Karanka.

''We played in Anfield and played against them face to face and that's the important thing on Saturday.

''I want us to finish the game on Saturday in the same way we finished against Liverpool - where everyone who watched the game thinks about how good a team Middlesbrough are.

''There's a big difference between us and Manchester City, but football is football.

''I know it's going to be a difficult game but we're preparing to fight face to face with them in the same way that we did against Liverpool.

They have amazing number of players, have a good coach and it will be very difficult for us.

''The normal thing would be for us to lose the game but I'm not here to prepare the team to lose.''