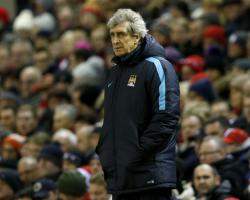 Prior to that sequence they had been regarded as title favourites.

With City closing in on a place in the Champions League quarter-finals, there has been a suggestion the club could prioritise the European competition but Pellegrini is still determined to reclaim the domestic crown.

The Chilean said: "We are not going to give up. Ten points is a lot but we have one game (in hand) and in the Premier League you never know when you are going to lose points.

"I don't see why the players would be in a negative mind. I think they try to win every time they play.

"We have just had a bad moment in the league but we have another 33 points to try to reach it."

The maximum points City can now attain is 80 and Pellegrini thinks that could be more than enough to win the title in such an unpredictable season.

He said: "I said a couple of months ago, before we ended the first round of fixtures, that for me maybe winner will have less than 80 points. It is impossible to know but I am sure we will have a champion of around 75 points or more."

But that would still require City to embark on a seriously strong run of form at a time when concerns might be growing about the challenge from clubs beneath them.

Manchester United and West Ham have taken advantage of City's poor form in recent weeks and are now challenging for their top-four place.

Missing out on Champions League qualification is certainly not in City's script but it is something Pellegrini, who will hand over to Pep Guardiola in the summer, is not even considering.

He said: "Don't ask me about thinking in a negative way because I never do it. It's not in my mind, thinking about that at this moment.

"It's important to improve our performance to try to continue fighting first for the title of the Premier League."