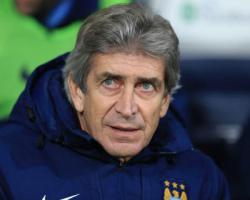 The Spain international was suspended after being found guilty of a Football Association charge of violent conduct for stamping on Liverpool's Emre Can during Tuesday's League Cup semi-final second leg at Stamford Bridge, which Chelsea won 1-0 to complete a 2-1 aggregate victory.

Pellegrini, asked for his views on Costa's ban during a news conference in Manchester on Friday, said: "He is a great player, a very important player.

"He has his character, it is not an easy character, but I hope for him that (with) this punishment -- and I am not trying to take advantage for the game tomorrow -- it will be a good thing for him to change in the future because he doesn't need to do it in that way because he is a very good player, a top player."

However, former Manchester United and England right-back Gary Neville said the decision to ban Costa for three games was "nonsense".

Neville, in a column for Britain's Daily Telegraph newspaper published online later Friday, said: "If I had to describe the Costa incident as a disciplinary incident the phrase I would use is 'a bit naughty'," the former United and England right-back wrote.

"The idea that Costa's behaviour was violent is nonsense," Neville, now a member of England manager Roy Hodgson's coaching staff, as well as a pundit, said

"I don't believe it was highly dangerous, or capable of snapping a leg, which would be despicable

"The (Martin) Skrtel clash was nothing; the Can one was a little bit naughty, no more."

There was no official reaction to Costa's ban from Chelsea or Jose Mourinho, with the club cancelling on Thursday the manager's scheduled pre-match press conference due to take place Friday.

However, Friday did see Chelsea post an interview on their website with playmaker Eden Hazard in which the Belgium international praised the ability of Brazil-born Costa, who has scored 17 goals in 19 Premier League appearances so far this season.

"He's one of the top strikers in the world

"He's a good professional and he gives everything for the team.

"He's an unbelievable striker because he can score at any time," added Hazard.

Meanwhile Pellegrini rejected suggestions Saturday's match was a 'title-decider' even though second-placed City, the reigning champions, will kick-off five points behind Chelsea.

"I think it is a very important game

It is not the game that will decide the title because after that we have to play for 45 points more," he said.

Lampard once said he would not play for a rival Premier League side.

But the 36-year-old's move to US Major League Soccer team New York City has been delayed by the decision of 'sister club' Manchester City to extend his loan spell at the Etihad.

Lampard came off the bench to score City's equaliser against Chelsea in September, but did not celebrate.

Asked what sort of reception Lampard would receive on Saturday, Pellegrini said: "I am sure that Frank Lampard will receive the best reception from their fans that they can do

He is a top player, maybe the most important in their history."