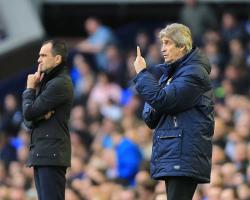 Although the visitors endured a difficult time after Romelu Lukaku pulled a goal back with 25 minutes to go they held on to assume pole position in the title race.

If City win their remaining two games at home to Aston Villa and West Ham they will regain the championship they won in 2012 irrespective of what Chelsea, who play on Sunday, or Liverpool, who play on Monday, do as they have a superior goal difference.

But Pellegrini is not thinking that far ahead just yet.

"I think it was a very big test

Three points is huge for us to continue to win the title," he said.

"It is important but we have not finished yet

We have just won one of the three games we must win to lift the title.

"Maybe there was some doubt before the match about what Everton would do against us but we knew we would have to have a game against a very good team.

"This is a difficult place to come, especially when you concede a goal at the start, and we did well to come back.

"It was all about the concentration and character of the team today."

City's move to the top may lessen the chance of a fairytale finish for Liverpool, who are still hoping to end their title drought stretching back to 1990 in a year which has the added symbolism of being the 25th anniversary of the Hillsborough disaster.

Pellegrini was asked whether he had any feelings about not being the most popular champions should they lift the trophy in the coming week.

"I don't know who will be the most popular champions because I am not talking about the title," he added.

"When we finish the season we can analyse all those things.

"After we lost against Liverpool (last month) I said the Premier League was not over and we must continue playing and we tried to do our best - that is why it is so important to try to win the next game."

They may be without Aguero, who was about to be substituted with a thigh problem before he struck his 17th league goal of the season, for the remainder of the campaign.

"Hopefully we will know tomorrow after the doctor has examined him," Pellegrini.

He came to me to tell me he was feeling some strange thing in his leg but he would try to continue playing as much as he could and he scored a very important goal for the team."

Everton manager Roberto Martinez felt that was a significant part in the game, although he believed Joe Hart's world-class save from Steven Naismith with the score at 2-1 was the pivotal moment as City went down the other end and added a third.

"There is a moment when Sergio is coming to the side and is trying to come off as he was feeling an injury and the next action he gets into a good position and leads to a goal," said the Spaniard, whose side's Champions League hopes were ended by the defeat.

"We were in total control and for us it was disappointing to concede that goal out of a bit of confusion with a player who needs to come off.

"The first chance of the second half Joe Hart made the save of the season.

"They went to the other end and we conceded a goal in a very important moment - I thought that was the turning point."

Aguero allayed fears about his injury, writing on Twitter: "Thank you for your concern

I left just as a precaution

Fortunately I'm fine, happy for the goal, the win and keeping our dream alive."