Pellegrini has faith in Bony 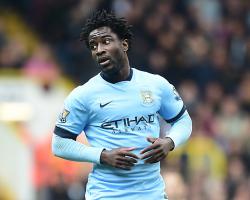 Bony has started only twice for City since leaving Swansea in January for an initial ÃÂ£25million fee which could yet rise to ÃÂ£28million.

But the Ivory Coast international showed the scoring instincts which brought him 34 goals in 70 games for Swansea against his old club on Sunday, netting late on as a substitute in City's 4-2 Barclays Premier League victory at the Liberty Stadium.

And City manager Pellegrini feels Bony will justify the club's huge investment in him next season after the 26-year-old's difficult settling-in period at the Etihad Stadium.

"He was very unlucky maybe this year when we bought him because he started by going to the Africa Cup of Nations and he came back with a lot of games in his body," Pellegrini said.

"After that he had an important injury in his ankle and his knee in the same leg, so he stopped for about three or four weeks.

"After that we won five games in a row and I didn't want to make changes during this moment.

"But it's very important for him to play the minutes he can, first last week against Queens Park Rangers and now he has participated with a goal at Swansea.

"I am absolutely sure we bought the player that we need and that he will be important in our future."

Bony's fellow Ivorian Yaya Toure scored twice at Swansea but speculation persists that he might leave Manchester City after five successful seasons at the club.

But Pellegrini insists that he wants the 32-year-old, whose Liberty double took him past the 50-goal mark in the Premier League, to stay.

"The way we play I like to have a technical midfielder and a scoring midfielder," Pellegrini said

"Yaya has scored a lot of goals last year and this year and our players like to play offensive football.

"I like to play that way also and he is one of the players we need."

Mangala joined from Porto for ÃÂ£32million last summer but the 24-year-old has had a difficult introduction to English football and again had some uncomfortable moments at Swansea, including being at fault for Bafetimbi Gomis' equaliser when he failed to cut out Jazz Richards' long ball.

"We will analyse this game but I think Mangala is improving in every game," Pellegrini said

"We won the last five games playing with him defending and I think this has been a year he needed to be settled in the Premier League.

"I am sure we will see the best Mangala next year."

Asked about City's own prospects next season, Pellegrini replied: "This season we did not win the title but we have continued to be the highest scoring team.

"We have done right things and next season we will again be a strong team - exactly the same as Chelsea, Arsenal, Manchester United and Liverpool.

"In England you have five squads who can all win the title and I think we will do well in the league and do better in both cups and the Champions League."