Pellegrini had faith in City 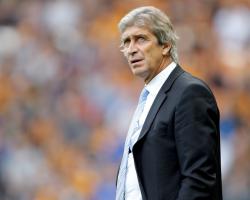 The Barclays Premier League champions were 2-0 in front inside 11 minutes as Edin Dzeko followed Sergio Aguero's opener with a wonderful strike from the edge of the area.

At that stage victory seemed a formality but ÃÂ£32million defender Eliaquim Mangala gave the Tigers a route back, putting a bullet header into his own net then conceding a penalty which Abel Hernandez stroked home.

Hull gave their more illustrious visitors more than one scare with the scores tied but Dzeko's second and a fourth in three games from substitute Frank Lampard sealed a 4-2 win for the visitors.

And Pellegrini revealed he was always confident of getting the right result.

"I really was very calm because I don't think it was the real (rightful) score in the first half," he said.

"You must have personality and character when that happens to try and return to normal.

"I felt during half-time the players were clear about what happened, it was not that we were playing badly.

I was very happy about that."

Pellegrini also played down his decision to hand Willy Cabellero a Premier League debut in place of England number one Joe Hart.

Caballero was brought to City as a credible challenger for the gloves and retained his place following his appearance in the 7-0 Capital One Cup win over Sheffield Wednesday.

"I think for Willy it was good to play not just one game but to play two in a row," he said.

"Joe played eight games in 32 days, a lot of games for a goalkeeper

I have a squad of 22, 23 players and I make rotations because I think it is better for the team.

"In this case I think it was good for Willy."

Pellegrini had a word of consolation for Mangala, who endured a bumpy ride following an outstanding debut against Chelsea last weekend.

"I think you cannot analyse a player on one match," he said.

"Not the last game when he played wonderfully and everyone said he was the best defender in the world and not today because he was very unlucky with the own-goal and the penalty."

Hull boss Steve Bruce was buoyed by his players' response to Manchester City's blistering start but admitted they had ultimately been beaten by the better side.

"We had an awful 10-15 minutes at the start and it shows character that they rolled their sleeves up and got back into it," said Bruce.

We weren't quite good enough but we gave it a right good go and against a quality team like them that's all you can ask for.

"City are a class act

"Aguero, Dezeko and David Silva, in particular, are wonderful footballers and they'll give every team problems."