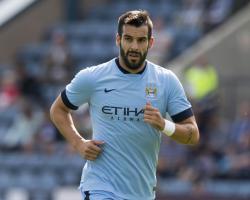 Negredo joined Valencia on transfer deadline day last week in a loan deal that will be made permanent next summer.

The transfer raised eyebrows as Negredo had impressed since his ÃÂ£20million signing from Sevilla last year and his exit leaves the champions with just three frontline forwards.

But City were under pressure to leave a senior player out of their Champions League squad having been limited to a reduced roster of just 21 by UEFA as punishment for breaching the European governing body's FFP regulations.

With Negredo sidelined until the end of October with a broken metatarsal he seemed an obvious candidate for omission for the first part of the season.

This, combined with a desire from the player to return to Spain, led to City accepting an approach from Valencia.

Pellegrini said: "The decision for Alvaro Negredo to go was for two very important reasons.

"The first was that we have the restriction for the number of the players we can use in the Champions League.

"We had one player more, (and) we could not use Alvaro, who was injured, so he was the player who was not going to be on the list.

"For him, it was very important because he wanted to go back to Spain, so I thought it was the best decision for the club.

We have restrictions about the amount of players and the money we can spend."

In addition to the reduced squad, City were also fined Â£49million and forced to limit their net summer spending to Â£49million.

Pellegrini said: "It is difficult for me to understand the punishment because the club spent money because they wanted to grow, they finished a new training ground.

"They were a small team and wanted to be a big team but now we have that punishment, that sanction, and we have to play with these restrictions."

City were linked with a deadline day move for Radamel Falcao from Monaco but the Colombia striker made a surprise loan move to rivals Manchester United.

Pellegrini, asked at his preview press conference for Saturday's Barclays Premier League clash at Arsenal, did not want to be drawn on the matter.

"I don't talk about players at other teams," the Chilean said.

Pellegrini was also unwilling to discuss comments by defender Micah Richards, who has joined Fiorentina on loan, that he was not given enough opportunities by the City manager.

Pellegrini said: "I never have a response to players through the press

I always speak to the players face to face."

City's trip to Arsenal begins a tough week in which they also travel to Bayern Munich in the Champions League and then host title rivals Chelsea.

Pellegrini's men also go into the tough period on the back of a shock loss to Stoke in their last game a fortnight ago.

Pellegrini said: "We must always try to win, especially when you didn't win the last game.

"We started better than I thought against Newcastle and Liverpool, with so many players (having had) just a few days to prepare.

"After that it was a surprise maybe to lose against Stoke but I don't think we played badly.

"Now we have this week with two difficult games in the Premier League and a difficult game in the Champions League but they are the games that motivate all the players."

Striker Stevan Jovetic suffered a hamstring injury on international duty with Montenegro and has been ruled out this weekend.

New ÃÂ£32million defender Eliaquim Mangala and former England midfielder Frank Lampard could be in line for debuts after building up their general fitness.