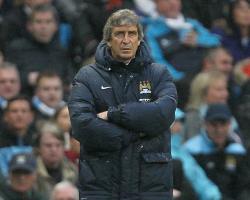 City moved two points above Liverpool ahead of Sunday's final match against West Ham with an ultimately convincing 4-0 win over Aston Villa at the Etihad Stadium.

Tension was evident as City failed to break through resilient Villa in the opening hour but an Edin Dzeko double changed the mood.

Late goals from Stevan Jovetic and Yaya Toure then transformed the atmosphere from relief to celebration and City effectively now need only a draw against the Hammers to win a second title in three seasons.

Pellegrini, in common with his chief rivals, has consistently spurned the favourites' tag for most of the season, but there is now no hiding from it.

Pellegrini said: "Now we can talk about the title because if we win the next game we are going to win the title.

"We could not do the same before this game because we had to beat Aston Villa.

"Of course I expect to win the title because now we are top of the table.

"It has been a strange season maybe because we were never top of the table.

Now we are top of the table and I hope we are not going to lose next Sunday."

City's four goals took their tally of league strikes for the campaign to 100.

Throughout the season Pellegrini has stuck to his attacking principles, sometimes in the face of criticism, but now he feels his approach has almost been vindicated.

He said: "I think it will be very important, not only (to win) the title but in the way we are going to win the title, if finally we win it.

"I think we have a style of play, I think we are an attractive team, I think we score many goals and we are always thinking to score more goals.

"That to me has the same importance as winning the title."

Villa, well organised with a five-man defence, did make life difficult but Pellegrini claimed he was not as concerned as the atmosphere suggested the fans were.

He said: "Maybe we didn't score in the first half but we played well, we had the possession of the ball, we didn't give any chance to Aston Villa to score and we continued playing patient to create the space.

It was the important personality and character of the team to continue playing the right way."

Villa manager Paul Lambert was pleased with the way his side approached the contest.

The Scot said: "Until the first goal I thought we were excellent, the gameplan was working great, trying to frustrate them and the them on the counter

I couldn't fault the lads."

It has been another difficult season for Villa, who almost got dragged into a late-season relegation battle once again.

Lambert is pleased to have engineered survival with a youthful squad but now wants the club to show greater ambition.

He said: "It is one of the greatest things I have done in my time.

"The main thing is to say in this league and keep the heritage of this club as a top-flight team.

"The lads deserve a lot of credit, we have had major injuries.

"But the football club needs investment

It smacks you right in the face.

"Any club that wins a European Cup and has a massive fanbase should never be in this position but it is."

The future direction of the club is uncertain with owner Randy Lerner having said he will respond to speculation about his intentions at the end of the season.

Lambert said: "I will wait with bated breath for what the chairman says.

"He will decide when he says it and what he has to say.

"I will respect whatever decision he makes."