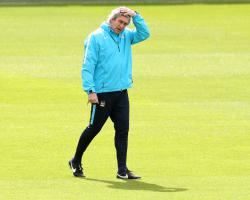 City were disappointing in their Champions League semi-final against Real Madrid, struggling to create meaningful chances in either leg of an underwhelming tie.

They went down with barely a whimper at the Bernabeu in midweek, with the 1-0 aggregate scoreline flattering Pellegrini's men.

Victory over the Gunners would lift City back above Arsene Wenger's side into third in the Barclays Premier League.

Pellegrini said: "I always visualise the positive things - to try to win the game against Arsenal that allows us to be in the third position.

"To play well, that is also very important

We didn't play well against Real Madrid and I don't like to play in that way.

"I expect us to recover our potential in attacking, that was our problem

We want to score goals and try to defend in the same way as we did against Real Madrid."

Both City and Arsenal looked well-placed to mount strong title challenges earlier in the season but neither side could find the required consistency.

Consequently Leicester powered away to claim a first top-flight crown and their closest challenge came from a side has not finished top since 1961, Tottenham.

With other big guns such as Manchester United, Chelsea and Liverpool having never been in contention, there is a feeling both City and Arsenal have missed an opportunity.

But Pellegrini said: "I don't think that because that would not be giving Leicester all the merit they deserve.

"To say they just won because the other teams didn't play well - I don't think so.

"They beat us, United, Chelsea

They deserved to win the title because they were the best team.

"I don't think all the big teams together couldn't play well - they just did it better.

City are without captain Vincent Kompany, who is still waiting to learn the extent of the groin injury he suffered at the Bernabeu

Pablo Zabaleta and David Silva remain on the sidelines while Aleksandar Kolarov also has a knock.