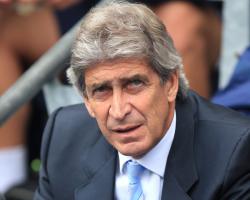 City have won four in succession since their underwhelming season reached its nadir with a 4-2 thrashing at Old Trafford, a result which prompted fresh speculation about the futures of the manager and several players.

Having slipped to fourth in the Barclays Premier League, there were even concerns City could miss out on the Champions League positions altogether.

Whether or not that set alarm bells ringing at the Etihad Stadium, those fears have now been banished following an upturn in form that has put City back in control of the race for second place.

Pellegrini accepts complacency may have crept in this term but - while not disguising his overall disappointment with the campaign - is pleased the team have recovered some of their intensity.

He said: "It was one of the problems, but it was not just the only problem.

In the Premier League it is very difficult to win.

"For our team it was always our target to win the title, (until) the moment the mathematics said we couldn't do it.

That is why it is so important to finish (the season) winning and in second place."

Pellegrini warns nothing can be taken for granted as City look to continue their winning run at Swansea on Sunday.

The Welsh side are still in contention for a place in the Europa League and should be buoyant after Monday's defeat of Arsenal.

Pellegrini said: "They have a very good season, they are playing well and they have an important amount of points

They are fighting to try and reach one position in the Europa League next year, so I think it has been a very good season for them and surely they will want to finish the same way.

"They like to play good football so it is not surprising the position they are in."

City's trip to the Liberty Stadium will see the first return of Wilfried Bony to the club he left in a deal potentially worth ÃÂ£28million in January.

The Ivory Coast striker is yet to fire since moving to City, scoring just one goal in 10 appearances, although he has been hampered by injury and also played at the African Nations Cup.

Bony was a star at Swansea and is looking forward to returning to south Wales, but is unsure what reception he might receive.

"They will be looking for me coming back and hopefully I will enjoy it," said the 26-year-old, who scored 25 goals in 54 Premier League appearances for the Swans

"I hope they will give me a nice reception

There will be some who are happy to see me and some not.

"They'll say, 'He's not playing there at City, only a couple of minutes, he should not have left'.

"But this is part of football, it is what it is

You can't be loved by everyone.

"Of course I would love to score back at Swansea."