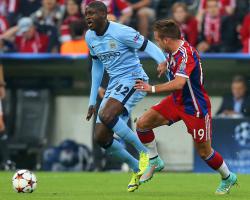 The normally influential Ivorian has not been his usual formidable self in City's early-season matches.

The 31-year-old's application, especially to defensive duties, and his body language were questioned after an ineffectual second-half display.

He also suffered a personal loss with the death of his brother.

Pellegrini insists Toure's heart is in the club and has no intention of singling out any player.

The Chilean said: "It is not fair for me to criticise what Yaya did in the last game.

"In this team - at least in my way of thinking - when we win or lose it is because all the team did well or did bad.

"I think everyone knows what is his best performance (is), of all the players, and are trying to reach that performance, all of them.

"I don't agree Yaya has all the responsibility about the game we played.

"Yaya always has commitment with the team and the squad, and his mates

He doesn't have problems about that."

When pushed further about Toure's form, Pellegrini insisted he would not focus on individuals.

The 61-year-old, speaking at a press conference to preview Sunday's clash with Chelsea, said: "The concerns are about the performance of the team.

It was a very unpredictable goal, but as a team I think we can do it better.

"That is why every week I try to improve the work we do as a team."

Pellegrini applied the same reasoning when asked about the heroics of goalkeeper Joe Hart at the Allianz Arena.

The England number one produced a series of outstanding saves to keep Bayern at bay, only for his luck to run out in the closing moments.

Pellegrini, who did not speak to the media after the game in Munich due to a touchline ban, said: "I repeat exactly the same when some of you asked me about Joe Hart against Stoke.

"I don't analyse individual performance with the press, I always talk with the players in the way I think they do it.

"All of you saw that Joe made a very good game, that is why he is number one with England, but I repeat I prefer to talk about the team, not individual players."

City now turn their attention back to the Barclays Premier League and the crunch visit of leaders and title rivals Chelsea.

Pellegrini's men go into the game without a win in their last three outings in all competitions with a defeat by Stoke and draw at Arsenal preceding the Munich loss.

The game raises the possibility of Frank Lampard, Chelsea's all-time leading goalscorer, playing for City against the club where he has spent the majority of his illustrious career.

He is now on loan at Eastlands to build up fitness for the Major League Soccer season.

There have been reports that Lampard, who is still to make his home debut for City, is reluctant to play against the Londoners but Pellegrini insists that is not the case.

He said: "Frank is part of our squad and tomorrow I will give the squad list for that game

For sure he will be involved in that game

He is part of the squad.

"I don't think it is a difficult situation for him

I think Frank didn't continue at Chelsea because they didn't want him, not because he wanted to come here to Manchester City.

He arrived here and we are very happy with him."