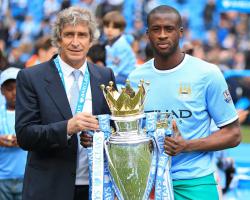 Toure's future was the subject of considerable speculation during an unsettled last summer when he voiced criticisms of the club - amid the notorious birthday cake furore - and suffered the death of a brother.

The player is now on international duty at the African Nations Cup with Ivory Coast but has again cast doubt over his club future in a television interview.

Asked if he would still be at the Etihad Stadium next season, Toure told CNN: "I don't know

I'm at City at the moment," before laughing.

It is not the first time the 31-year-old has been vague on the subject but Pellegrini has no concerns about it.

The Chilean said: "I think Yaya is 100 per cent committed with our team and with this team

I don't have any doubts about that."

Pellegrini was speaking at a press conference to preview Sunday's Barclays Premier League clash against Arsenal, for which he will be without playmaker Samir Nasri as well as Toure.

Nasri suffered a calf injury in training this week and will not only miss facing his old club but also the trip to title rivals Chelsea later this month.

Asked how long Nasri will be out, Pellegrini said: "Around three weeks or a month

Before that (playing) is difficult."

Pellegrini otherwise reported a fully fit squad but was unsure whether top scorer Sergio Aguero, who returned from a seven-game absence as a substitute at Everton last week, was ready to start.

The City boss said: "He is working with the squad every day so he doesn't have any problems

Aguero will have a new strike partner next month after the club's signing of Toure's Ivory Coast team-mate Wilfried Bony from Swansea this week.

Bony, who has signed for a basic ÃÂ£25million fee that could rise to ÃÂ£28million, will move to City when his current international commitments end.

Bony is effectively a replacement for Alvaro Negredo, who left the club for Valencia last summer on a loan deal that is set to be made permanent.

Pellegrini said: "It was important to replace Alvaro Negredo

When we sold we said we were going to have the decision in December after seeing these four months.

"We have too many injuries so it was important to have a fourth striker."

Pellegrini says that means there is no chance of another forward, Stevan Jovetic, leaving City despite reports linking him with Juventus.

He said: "Stevan is a very important player for us

Bony is replacing Alvaro, not Jovetic."

Pellegrini was reluctant to discuss the possibility of more signings before the closure of the winter transfer window but has not completely ruled out the possibility.

He said: "We are not thinking about that in this moment but I always said the transfer window is the end of January and we will see what happens in the future

But if you ask at this moment, I think we have the squad for the end of the season."

City are limited to a reduced 16 non-homegrown players in the competition this season as a punishment for breaching Financial Fair Play regulations - a capacity they have already reached.

If no player is sold, one will have to be de-registered

Various reports have claimed full-back Bacary Sagna or Jovetic could make way, but Pellegini has reiterated his position of last week that no decision has been made.

He said: "In February we need to give the squad list for the Champions League and we will see what happens in that moment and decide which is the player who will not be in the list."

One player who left the club this week was Serbia defender Matija Nastasic - who had no bearing on Champions League squad matters because he counted as under-21 - following a loan move to Schalke.

The 21-year-old had fallen out of favour under Pellegrini and not appeared since the Community Shield on August 10.

Pellegrini said: "I think we have the four centre-backs we need in our squad but I don't have any problems with Matija

He is welcome here if he comes back.

He needs to play more in this moment

In this club, it is difficult."