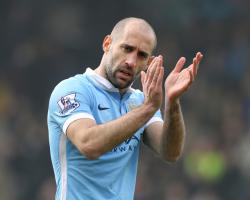 They will find out their opponents on Friday but for now the Premier League offers more pressing engagements, with the visit of neighbours Manchester United.

The Manchester derby always has plenty riding on it and this year it could prove key in deciding which team, if either, finishes in the top four.

Zabaleta said: "I have been here a long time and know how special this game is

"Since Tuesday the media have talked about City making history in the Champions League, but here everyone is just talking about the derby

"That's normal when a big game is coming - celebrate doing well in Europe if you like, but we are only thinking about United."

City sit fourth in the table, four points ahead of sixth-placed United, with West Ham breathing down their necks in fifth.

City have not yet given up hope of challenging for the title but, with 12 points separating them from leaders Leicester, Zabaleta knows it will be extremely difficult.

He said: " The players know how much this game means to the fans, but we also know we can't drop any points

"Leicester keep winning their games, and then you look at the rest of the teams and everything is really tight from third place down to sixth or seventh.

We can't make any mistakes, and we have been dropping a lot of points.

"We want to see City fans celebrating the derby and then we can start thinking about our national teams."