Nothing is won yet 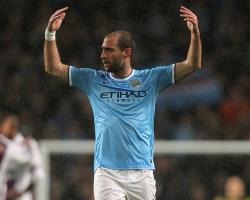 City effectively need only a draw from their final game of the season against West Ham on Sunday to clinch a second Barclays Premier League crown in three years.

Manuel Pellegrini's men put one hand on the trophy as they beat Aston Villa 4-0 on Wednesday to move two points ahead of Liverpool, and with a much superior goal difference.

Some anxiety was evident as City were forced to wait until the 64th minute for Edin Dzeko to break the deadlock, but the mood was celebratory by the time Yaya Toure scored the fourth.

Fans will now hope to turn Sunday's clash into a party but Zabaleta has warned the job is not done yet.

"Everybody was happy, of course," the right-back said

"Every time you win a game like that you celebrate, and we knew it was an important game to give us another step forward for the title.

"But every single player knows we have done nothing yet.

"We need to keep fighting

We have been doing it for the whole season so we will change nothing.

We will play to win."

City know all about last-day roller coasters having famously struck twice in the closing minutes against QPR in 2012 to snatch the title from Manchester United on goal difference.

With Liverpool playing Newcastle simultaneously, even though City have the upper hand, the potential for a nerve-jangling finish still exists.

Zabaleta said: "Most of our players have been here for more than two years, so we have experience of the game against QPR where everything was decided in the last minute.

"We don't want that again, so we need to have a good rest because Sunday will be another tough game.

"We need to finish this with a big win on Sunday, and we need the fans from the start.

"They have a chance to celebrate another title so I am sure the atmosphere here on Sunday will be fantastic for 90 minutes, and I am sure the players will give 100 per cent to win the game.

"I hope that after 95 minutes we are all celebrating together."