Nastasic moves to Schalke on loan 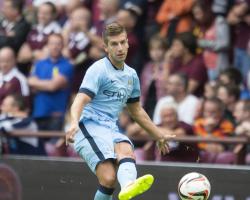 The centre-back has only played once this term - in the Community Shield defeat to Arsenal - and he has been allowed to leave for the Bundesliga side, who are managed by former Chelsea boss Roberto Di Matteo.

"Schalke have now agreed with Manchester City the final details of a loan for Matija Nastasic subject to a medical," a statement on Schalke's website said.

Schalke confirmed Nastasic will remain on loan with them until the end of the season and they also revealed "a purchase option" has been agreed with City for the 21-year-old.

Nastasic joined City from Fiorentina in 2012 and became a regular under former boss Roberto Mancini.

The Serbian only made 11 league starts under Pellegrini last season, though, and he has not turned out for the Premier League champions since August 10.