Nasri out for three weeks 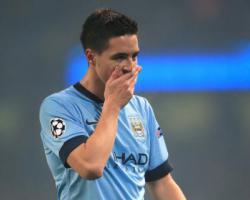 The Frenchman has a calf strain which is set to keep him out of action for at least three, Chilean boss Pellegrini said Friday.

"We have had some problems in the week with Samir," Pellegrini explained

"I think he will be out for three weeks but (to return) before that is difficult."

However, Pellegrini said club captain Vincent Kompany and star striker Sergio Aguero were both fit to start against Arsenal after returning from injury

"Vincent is 100 per cent okay, no problems," Pellegrini said

"Sergio is working with the squad every day, so he doesn't have any problem

We will see if he starts, but at the moment he is 100 percent fit."

City are currently second in the table, two points behind leaders Chelsea -- who play Swansea on Saturday -- and 11 in front of fifth-placed Arsenal