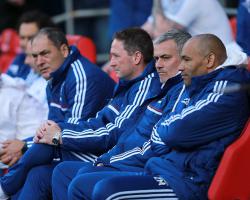 Fernando Torres netted the decisive strike in a 2-1 win after substitute Andre Schurrle had cancelled out Craig Bellamy's first-half opener.

Serial winner Mourinho was left to bemoan the controversial losses at Aston Villa and to Sunderland after the Blues finished four points behind champions Manchester City at the end of a rare trophyless campaign for the self-proclaimed Special One.

"They are not guilty of Aston Villa-Chelsea and Chelsea-Sunderland, it's nothing to do with them

"I never did (finish third)

It's the first time

Third position is not a drama

It's a position we have to accept in this transitional period.

This season it almost happened, but, for the last time, Aston Villa-Chelsea and Chelsea-Sunderland make it more difficult."

Mourinho, who will present his end-of-term report to the Chelsea hierarchy on Monday, mentioned the two losses on six occasions while promising a title challenge next term.

He added: "Next season, if we do our work in a successful way during the summer market - I know the club is trying to do everything to make that period a successful period for us - I want to start day one saying that we are going to fight for the title.

"We need to improve and we don't run away from that responsibility.

"The club will not run away from responsibility of bringing a couple of important players to us.

"(And) I will not run away from my work to keep developing the team."

Mourinho insists the Chelsea squad does not require major surgery and wants to keep out of contract trio John Terry, Frank Lampard and Ashley Cole, who is considering his options away from Stamford Bridge after eight years.

Cole, who was second-choice left-back this term, captained Chelsea in the absence of Terry (knock) and Lampard (illness), both of whom are reportedly pondering contract extensions on reduced terms.

Asked if that was Cole's final appearance, Mourinho said: "I don't know, but I don't think so.

Nevertheless Cole and other senior personnel will have to accept a more peripheral role if they are to stay on.

Mourinho expects Torres will stay, despite suggestions Chelsea will cut their losses on the ?50million striker.

The Blues boss said: "I think he will be at Chelsea

I don't know, I cannot say.

"The summer is a long summer

I can't believe that my next Premier League match I have to wait for three months.

"During these three months a lot of things can happen

Samuel Eto'o will finish his contract with the club so the normal situation is that he is leaving.

"We want to bring in a striker

Fernando and Demba (Ba) have contracts and have different situations

I am happy with them.

"(It is) no problem for me that they stay at the club if they are happy and committed."

Cardiff boss Ole Gunnar Solskjaer insists there is quality in his squad which was evident on the final day.

"Everyone can see signs," he said

"Of course, the difference in quality started to show in the end."

Bellamy will take time to consider his future at his hometown club.

He's going to think about what he wants to do.

"For everyone in the club it's been a long, trying and testing period

You need some time to reflect and think about where you want to go and what you want to do."

Solskjaer knows the characters he wants at the club.

"It's got to be lads who love playing football, love that side of it, not the other side of football - the cars and all that flash bits," he said.

"The players here have got the experience of the Championship and that experience is something we've got to draw on."

Solskjaer also has the support of controversial owner Vincent Tan.

"We did have a good chat last night," the Norwegian added.

It's important for me that he trusts me to keep managing the club and taking it forward."