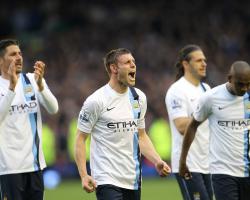 A 3-2 win at Everton, where they had to withstand some sustained second-half pressure, put the destiny of the Barclays Premier League title back in their hands and home victories against Aston Villa on Wednesday and West Ham next Sunday will see them win the championship for the second time in three seasons.

Their superior goal difference means they will not be caught if they take six points from their final two games but Milner admitted they may have to accept winning at any cost rather than rely on blowing away their opponents as they have at the Etihad all season.

"That game was very reminiscent of the Newcastle game (their penultimate fixture in 2011-12 which they won 2-0) when we won the title," said the England international.

"We didn't play well second half but to grind out the result shows that other side to us.

"People see the ability in the side and how we move the ball and score goals but you can't win if you don't grind it out and fight for every ball.

"Joe Hart made at least one ridiculous save - the one on the break (from Steven Naismith) - and has been absolutely outstanding.

"We won't get carried away because we know better than anyone how close can it be (having won the title on goal difference with virtually the last kick of the season in 2012).

"People look at our home fixtures and say we'll definitely win those but we have two tough fixtures and so much can happen; in our experience it went to the wire and it can do that again.

"No-one is looking too far ahead

Everyone knows how tough it is to win a league title and how much goes into it.

"With two games left we have to make sure with two 90 minutes left we give absolutely everything and play to our potential."

Having fallen behind to Ross Barkley's brilliant opener City equalised through Sergio Aguero only for the Argentina striker to be forced off soon after with injury.

Edin Dzeko scored either side of the interval before Romelu Lukaku's header 25 minutes from time set up a nervy finish for Manuel Pellegrini's side.

Dzeko has scored seven in his last nine appearances, which is more than timely considering the difficulties Aguero has had and the dramatic loss of form of Alvaro Negredo who has not scored in the league since January 12.

"It is my job to score the goals and I am very happy for that and happy for the team because I think we are playing well to win the games, which is most important," the Bosnia international told CityTV.

"To go 1-0 down we were definitely under pressure

We tried to give everything and I think we did an amazing job.

"We knew if we won all our games we would be first and this was the only one away and maybe the toughest one.

I remember when we won the league against QPR everyone was expecting us to win it easily but it was tough until the last minute and I think we learned something from that.

"We won't underestimate the teams."