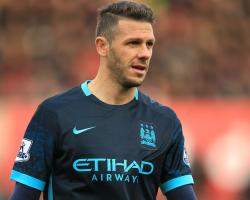 City are still third in the Barclays Premier League, three points behind leaders Arsenal, after being held to a frustrating goalless draw by Everton at the Etihad Stadium on Wednesday.

Defender Demichelis feels the game was an opportunity missed - as Arsenal also drew at Liverpool on the same night - and hopes the ground can be made up quickly.

City face another test of their credentials as they host Crystal Palace on Saturday.

Demichelis said: "I think it was important Arsenal didn't win and we are just three points behind the leaders.

"We must continue the fight until the end and we have a lot of games to recover three points, but we need as soon as possible to win.

"Arsenal have a game at Stoke - it is a difficult game - so we have a chance to recover these three points.

"If we continue playing like in the second half I think we will win the next game and then the next."

They certainly ended the game feeling aggrieved after Raheem Sterling was denied a penalty in injury time after appearing to be fouled by John Stones.

City could at least reflect on a strong defensive showing

The team have struggled at the back in the continued absence of captain Vincent Kompany but Demichelis, back in the side with Eliaquim Mangala also injured, and Nicolas Otamendi held form for a second successive game.

Demichelis, 35, said: "I think we tried everything to win the match but the goalkeeper for Everton and their complete team defended really well.

"We tried everything to win three points, so we are unhappy we didn't win, but the positive was we did not concede any goal

I think we are in a good way and we must continue playing (as we did) in the second half."

Everton are still down in 11th but the result, a week after they beat City at Goodison Park in the first leg of their Capital One Cup semi-final, was another positive one.

They will now approach the second leg of that cup tie at Eastlands in a fortnight in a positive mood, with a Wembley final within grasp, but manager Roberto Martinez is taking nothing for granted.

Martinez said: "We can draw an incredible satisfaction from this performance, it is a performance we can build on, but we know it is going to be a completely different game in two weeks' time

I think this was a completely different game from the one we had last week at Goodison.

"You are looking at two teams with enormous technical ability, with a lot of goalscoring threat

From a mental and psychological point of view it was important to be able to beat Manchester City like we did last week, and to be able to get a clean sheet at the Etihad.

"That will give us a lot of confidence but we are under no illusions it is going to be a completely different competition and a different game."