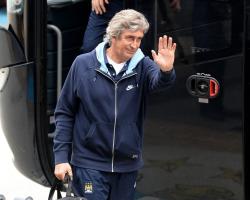 Pellegrini is proud not only of the position City are in heading into their final game of the Barclays Premier League season but of the manner in which they have got there.

Pellegrini has advocated an attractive brand of attacking football all season and, despite criticism his approach was too reckless at times, he has rarely deviated.

With City now realistically needing just a draw against West Ham on Sunday to secure a second title in three seasons, his methods are close to receiving significant vindication.

The Chilean said: "I repeat, the reality is the way we did it is one of my best achievements in this season.

"The first thing I can say is we chose the right squad for what we needed to do this year."

Pellegrini now expects his side, which moved two points clear of Liverpool at the top by beating Aston Villa 4-0 in midweek, to complete the job against the Hammers.

He knows the possibility for jitters still exists, however, and will want his players to follow his ice-cool example.

Pellegrini has betrayed little emotion all season and that is an approach he has honed from experience, having been "different" in his younger days.

"I think when I started this career I had, absolutely, a different character," the 60-year-old said.

"As a player I was a different character to the one I am today but to prepare to be a manager I think you must change a lot of things.

"You have to understand you are not a player and have another attitude with the players."

Asked if he does suffer from nerves, the former Malaga coach said: "I know how to control (them) - it is different.

"After so many years, it is very important to control your emotions because when you have to take decisions under emotion normally you do it the wrong way.

"I think it is very important of the manager to be calm, to try to repeat what we did the whole year.

"I expect to win

We are thinking not of winning one point but just winning the match, and the best way to do it is to play the way we always do."

Pellegrini has a fully-fit squad available with Sergio Aguero back in contention after a groin injury.

Aguero, top scorer with 28 goals in all competitions this season, missed the game against Villa after limping out of the action at Everton last weekend.

Pellegrini said: "The whole squad is fit for Sunday

It is very important, always for a manager, if you have your whole squad and choose from all your players."